What is the role of fecal calprotectin in monitoring in the treat-to-target strategy in IBD?

Fecal calprotectin is an important reliable, simple, inexpensive, and safe biomarker in inflammatory bowel disease (IBD) that can distinguish inflammatory from noninflammatory disease.(1) Fecal calprotectin levels correlate well with both endoscopic and histologic findings.(2–5) This biomarker may therefore have a role in proactive monitoring of patients in remission, and it may reduce the number of endoscopies required. In the treat-to-target strategy, fecal calprotectin is considered an adjunctive biomarker, rather than a treatment target, in measuring treatment response and mucosal healing and predicting relapse.(6) Calprotectin can also support differentiation of IBD from irritable bowel syndrome (IBS).(7)

A review of the literature indicates that fecal calprotectin testing of the first morning sample should be used as the standard of care to confirm inflammation when an IBD flare is suspected.(8) Nevertheless, the role of fecal calprotectin in routine monitoring in the treat-to-target strategy has not yet been determined, as additional data are required to define optimal cutoff levels and patients who can benefit the most. Suggested cutoff values and management strategies for adults with IBD have been identified (Table 1). 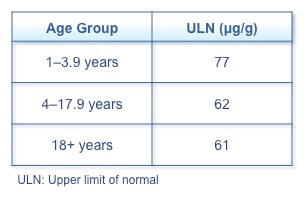 Fecal calprotectin in treat to target

The Selecting Therapeutic Targets in Inflammatory Bowel Disease (STRIDE) program examined potential targets and the evidence supporting them and developed consensus recommendations for treatment targets for ulcerative colitis (UC) and Crohn’s disease (CD).(6) In patients with CD, STRIDE stated that fecal calprotectin may be a useful adjunctive biomarker to measure response to therapy and predict relapse, especially in Crohn’s colitis and after ileocecectomy. In UC, fecal calprotectin correlates well with response to induction and mucosal healing and predicts loss of response to maintenance. Failure of normalization with therapy should prompt additional endoscopic evaluation. In both UC and CD, insufficient evidence exists to recommend treatment optimization based on fecal calprotectin alone. Evidence on the correlation between fecal calprotectin and endoscopy and fecal calprotectin and histology is, however, accumulating.

As fecal calprotectin levels correlate well with endoscopic findings, routine use of fecal calprotectin for monitoring in the treat-target strategy may significantly reduce the number of endoscopies required.(2) What still needs to be determined is whether this biomarker can replace endoscopic mucosal healing as a treatment target, the optimal time for testing after induction, and whether changes from baseline more accurately reflect response than standard cut-off levels, as these may vary between individual patients.

Reliable and accurate point-of-care tests that allow rapid testing in the patient’s home or the clinician’s office increase the accessibility and feasibility of fecal calprotectin testing (Table 3).(2) In endoscopy-proven IBD, the results for both point-of-care tests and standard techniques were similar, although no large comparisons have been performed. Using the first morning fecal sample reduces intertest variability. 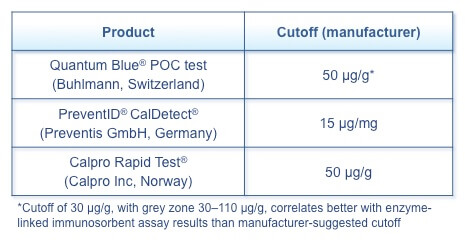 Several studies have demonstrated the correlation of fecal calprotectin levels with histologic findings.

A multicentre cohort study evaluated the use of histology as a treatment target and the utility of fecal calprotectin in predicting histologic disease activity.(3) The study included 20 patients with moderately-to-severely active UC who were initiated on infliximab treatment and measured histologic remission at 8 weeks. Histologic remission was seen in 15% and mucosal healing was achieved in 45% at 8 weeks. Fecal calprotectin was correlated with histologic activity at week 8 (area under the curve 94%, P=0.017) and had an excellent positive predictive value (100%, P=0.017).