What is the relation between extraintestinal manifestations and treatment choice in IBD?

Extraintestinal manifestations (EIMs) of inflammatory bowel disease (IBD) can substantially affect the morbidity associated with the disease, and some EIMs, such as primary sclerosing cholangitis or thromboembolic conditions, can increase mortality. The development of one EIM may increase the risk of additional EIMs.(1) Many patients with EIMs have extensive colitis and may have a positive family history for IBD. EIMs are more common in patients with Crohn’s disease (CD) than in those with ulcerative colitis (UC).

The frequency, type, and order of appearance of EIMs relative to IBD diagnosis was assessed in a 1249-patient cohort, of whom 366 (29.3%) had EIMs (Table 1).(1) The majority (63.4%) had only one episode. The first EIM was identified in 25.8% of patients at a median 5 months (range 0–25 months) before IBD diagnosis. In 74.2% of patients the first EIM was seen at a median 92 months (range 29–183 months) after IBD diagnosis. A finding of EIMs should prompt investigation for underlying IBD, as this can reduce delay in IBD diagnosis and may allow prevention of bowel damage. 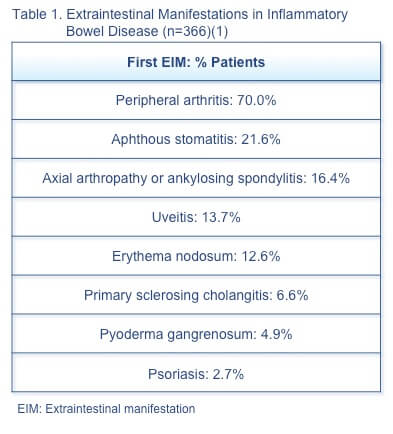 A study assessing the impact of early vs late treatment of IBD with a tumour necrosis factor-α (TNF-α) inhibitor on complications of IBD and EIMs included 413 newly diagnosed patients, of whom 85 received a TNF-α inhibitor.(2) Analysis of the data found no benefit of early treatment on development of complications or EIMs, but patients who achieved mucosal healing were 11 times less likely to develop EIMs than those who did not achieve mucosal healing. These findings emphasize the importance of the treat-to-target strategy with mucosal healing as the therapeutic target of choice.    EIM: Extraintestinal manifestation

A prospective assessment of paradoxical articular EIMs in patients with IBD in remission during treatment with TNF-α inhibitor included 80 patients.(3) A total of 50 patients (62%) had articular manifestations, of which 9 (11%), in patients with CD, were considered paradoxical. No clinical or biological factors linked to paradoxical articular manifestations could be identified. It is also unclear, in the case of articular symptoms that may occur during TNF-α inhibitor therapy, whether these are an unmasking of EIMs by the TNF-α inhibitor or a separate adverse effect of the therapy that is independent of the underlying IBD. No consensus exists as to their management, although analgesics, methotrexate, or corticosteroids may be useful.

A retrospective analysis of epidemiologic and clinical data from patients with IBD (n=395) assessed predictive factors for erythema nodosum and pyoderma gangrenosum.(4) Factors independently associated with dermatologic EIMs (n=37) were female sex (P=.008), young age at diagnosis (P=.026), CD (P=.043), and presence of other EIMs (P=.0001). Patients who had received previous biologic therapy were less like to have EIMs (P=.007). These results suggest that biologic therapy may be effective in preventing the development of dermatologic EIMs.

A retrospective database study (N=4,137) to understand the characteristics and management of pyoderma gangrenosum in patients with IBD identified 80 patients (Table 2).(5) Pyoderma gangrenosum is a severe EIM associated with substantial morbidity and costs. The predilection of this condition for patients with active disease underscores the importance of effective IBD treatment. 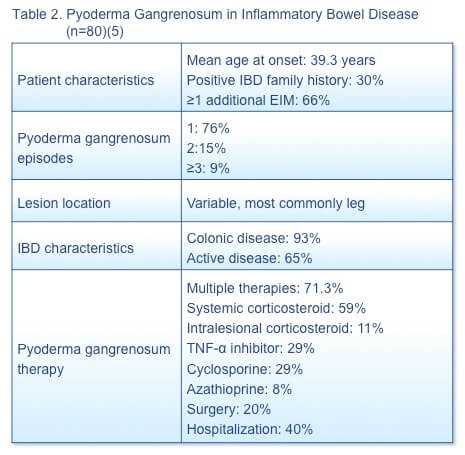 The ocular EIMs, scleritis, episcleritis, and uveitis, have the potential to cause significant morbidity but are relatively uncommon. Ocular symptoms, such as itching, burning, and visual disturbance are relatively common in the IBD population but, in most cases, are not due to ocular EIMs. A cross-sectional study of IBD patients found that 44% of patients reported ocular symptoms, but a thorough ophthalmologic evaluation found ocular EIMs in only 1 to 2%. Early recognition and treatment of ocular EIMs is important to avoid complications and subsequent long-term morbidity. It is also important to recognize that the presence of the ocular EIMs does not always parallel the activity of the intestinal disease.Ocular EIMS

A study of 92 consecutive patients with primary sclerosing cholangitis (PSC) assessed the natural history of this condition in patients with or without IBD and the long-term efficacy of biologics.(7) Approximately half of the patient population had IBD. No significant difference in rates of liver transplantation, malignancy, or mortality was seen between patients with and without IBD. Biologic agents were used in 5 patients: adalimumab (n=3), infliximab (n=1), and rituximab (n=1). Adalimumab therapy resulted in 12-month clinical remission in 2 patients with IBD. Liver function tests improved at 6 and 12 months in patients receiving infliximab and adalimumab, but tended to deteriorate after that time. Additional studies are needed to assess the long-term efficacy and safety of biologics and predictors of response in this population.

PSC may be the best-recognized hepatic EIM, but other hepatic abnormalities, such as autoimmune hepatitis or pericholangitis, can occur in IBD patients. It is important to note that liver enzyme abnormalities are relatively common in the IBD patient population and are often not due to underlying hepatobiliary EIMs. Drug therapy, most commonly thiopurine or methotrexate therapy, is a common cause of abnormal liver enzyme elevations. Liver enzyme abnormalities may also occur in patients receiving biologics and may herald the development of autoimmune hepatitis.

A retrospective cohort study (N=1753) identified new-onset alanine transaminase (ALT) elevation (≥60 U/L) after TNF-α inhibitor initiation.(9) ALT elevation was identified in 102 patients (6%); in 54 (3%), another cause could be identified. In the remainder (n=48), the median time from TNF-α inhibitor initiation to ALT elevation was 18 weeks. Liver biopsy (n=6) found hepatitis with autoimmune features. The majority (n=34) continued the biologic, whereas 14 discontinued it and 4 started on corticosteroid therapy. Liver tests normalized in 85% of patients after a median 17 weeks, including 82% of patients who continued biologic therapy. A second biologic was initiated in 10 patients without recurrence. Most idiopathic elevations of ALT were mild and resolved despite continued biologic therapy.

The literature has documented 17 cases of autoimmune hepatitis in adult patients receiving TNF-α inhibitor therapy, with ≥11 cases in adults with IBD.(8) A report describes 2 cases in children with IBD that developed after 5 months of treatment with infliximab. Liver function tests normalized after infliximab discontinuation. It is important for clinicians to be aware that increased transaminase levels with infliximab therapy may be due to immune-mediated hepatotoxicity and not necessarily an indication of an underlying hepatobiliary EIM.