Mentoring in IBD is an innovative and successful educational program for Canadian gastroenterologists that now includes an annual national meeting, regional satellites in both official languages, a website, an educational newsletter series, and regular electronic communications answering key clinical questions with new research. This issue is based on the presentation made by contributing editor, Dr Khursheed Jeejeebhoy, at the annual national meeting, Mentoring in IBD XVI: The Master Class, held November 6, 2015 in Toronto, Ontario.

Vitamin D is a critically essential nutrient for all people, irrespective of the presence of inflammatory bowel disease (IBD). All tissues, not just bone, require vitamin D. There are five forms of vitamin D, and vitamin D2 and D3 are the forms with major biologic importance (Figure 1). Vitamin D2, which is also known as ergocalciferol, is derived from diet.(1) Vitamin D3, also called cholecalciferol, is derived both from diet and from the action of sunlight on the skin converting 7-dehydrocholesterol, or provitamin D3, to vitamin D3. The majority of vitamin D in the body is produced by exposure to sunlight. 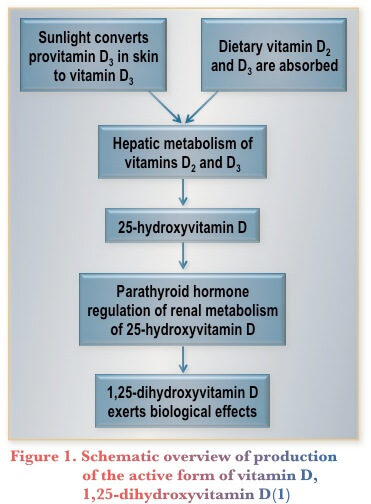 Vitamin D sufficiency is considered to be the level of 25-hydroxyvitamin D providing a parathyroid hormone nadir and maximal intestinal transport of calcium. Elevated parathyroid hormone levels remove calcium from bone, and osteoporosis is related to chronic vitamin D deficiency. Using these criteria, deficiency is defined as a 25-hydroxyvitamin D level <50 nmol/L, insufficiency as 52-72 nmol/L, and sufficiency as >75 nmol/L.(2) Toxic levels are >300 nmol/L. 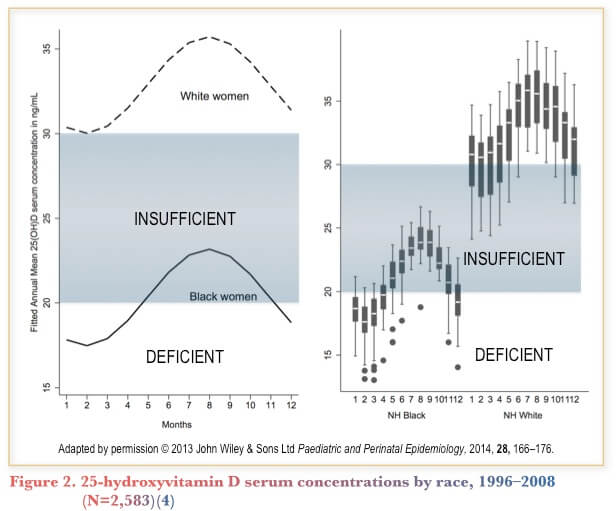 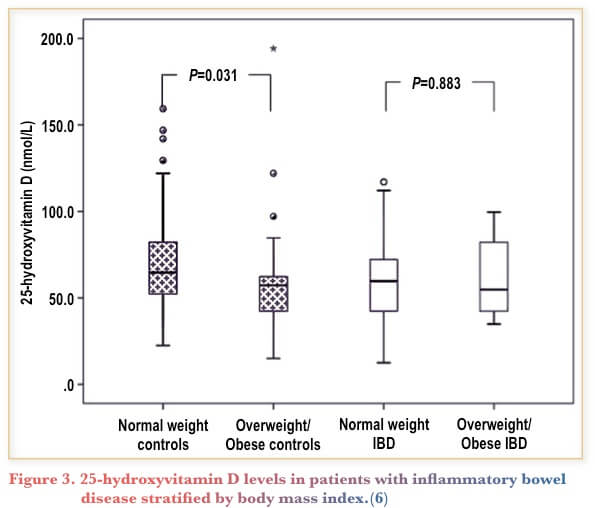 A retrospective cohort study of patients with IBD (N=504) assessed disease activity, health-related quality of life, and the prevalence and predictors of vitamin D deficiency.(7) Deficiency was present in 49.8% of patients, and severe deficiency in 10.9%. Predictors of deficiency were older age (P=.004) and older age at diagnosis (P=.03). Insufficiency or deficiency of vitamin D was present in a majority of patients and was associated with lower health-related quality of life in patients with CD and in those with ulcerative colitis (UC) and with increased disease activity in CD.

Risk factors for vitamin D deficiency that have been identified in patients with IBD include decreased exposure to sunlight, increased disease duration, smoking, and genetics. Increasing evidence supports the role of vitamin D as an immunomodulator that can reduce inflammation and induce antibacterial activity in IBD. 1,25-dihydroxyvitamin D acts on CD4 cells to promote Th2 cell development and on dendritic cells to reduce Th1 cells.(1) Also, the induction of anti-inflammatory cytokines, interleukin (IL)-4, IL-5, and IL-10, suppresses inflammation. Normalization of vitamin D levels is associated with a reduction in the risk of relapse and IBD-related surgery and an improvement in quality of life. Additional research needs to determine optimal 25-hydroxyvitamin D levels to achieve beneficial immune effects and to elucidate the role of vitamin D in achieving and maintaining response and remission.

© Catrile & Associates Ltd., 2016. All rights reserved. None of the contents may be reproduced in any form without prior written permission from the publisher. The opinions expressed in this paper are those of the authors and do not necessarily reflect the opinions or recommendations of the sponsors, the grantor, or the publisher.