Treatment with azathioprine is a risk factor for early EBV positivity in children with IBD.

Serum samples from pediatric IBD patients attending a single tertiary centre were tested for antibodies and viral load against the EBV, CMV, BK polyomavirus, and JC virus. Associations between a patient’s medication regimen and seropositivity were assessed.

There were 106 eligible patients enrolled (CD, 72; UC, 31; Indeterminate, 3). The mean age range for all groups was 8 to 12.6 years. EBV seropositivity was associated with increasing age whereas CMV or BKV (perhaps because of low numbers) did not.

Likelihood estimates found that early use of azathioprine monotherapy and azathioprine+infliximab to be predictive of childhood EBV seropositivity. 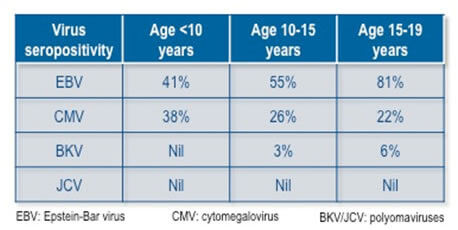 Do GIs and patients have similar IBD treatment expectations?

Cancer risk due to IBD medications