Update on biosimilars in the management of IBD

Mentoring in IBD is an innovative and successful educational program for Canadian gastroenterologists that now includes an annual national meeting, regional satellites in both official languages, a website, an educational newsletter series, and regular electronic communications answering key clinical questions with new research. This issue is based on the presentation made by the issue editor at the annual national meeting, Mentoring in IBD XVII: The Master Class, held November 4, 2016 in Toronto, Ontario.

As the patent lives of biologics come to an end, biosimilars are being developed. These agents will help to reduce the high cost of chronic biologic therapy and improve access. Unlike generic drugs, which are chemical copies of the originator, production of tumour necrosis factor-α (TNF-α) inhibitor biosimilars attempts to replicate the tertiary and quaternary structures and surrounding carbohydrate moieties of the originator protein. Numerous factors affect post-translational carboxylation, making exact duplication impossible — even originator TNF-α inhibitors have some degree of internal variation within and between each batch. Subtle differences in structure may result in substantial functional differences.

The regulatory pathway for approval of biosimilars assesses these agents for equivalent structure and function to the originator, measuring about 100 attributes in vitro, then in vivo, and finally in clinical studies (Table, Figure).(1,2) Rather than requiring clinical trials for each indication, the regulatory analysis allows data from a phase III clinical trial in a representative disease population to be extrapolated across all approved indications. Both head-to-head comparisons and single- or multiple-switch studies have formed the basis of regulatory approvals for infliximab and adalimumab biosimilars in rheumatoid arthritis, ankylosing spondylitis, and psoriasis, and these data have been extrapolated to inflammatory bowel disease (IBD).(3–9) 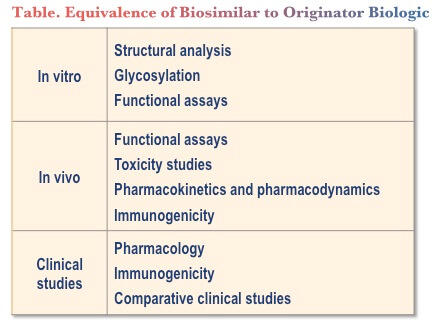 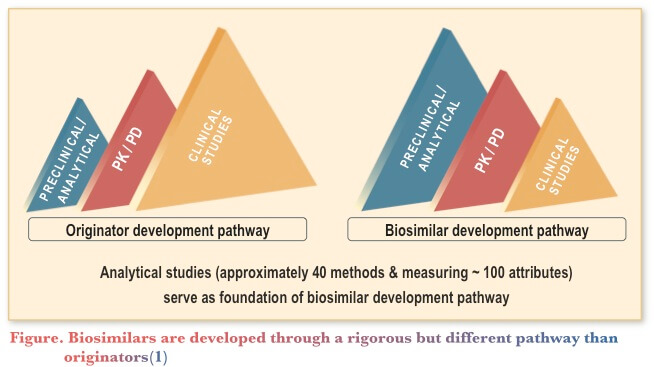 Issues with biosimilars that are of concern in IBD include extrapolation, immunogenicity, and interchangeability.

Both the Food and Drug Administration (FDA) and the European Medicines Agency (EMA) have addressed concerns about the concept of extrapolation by considering it on an individual basis, by potentially requiring clinical trials in conditions where the mechanism of action is not understood, by requiring superimposable biologic data addressing all functional aspects of the agent, and by ensuring that clinical data are generated using an endpoint sensitive enough to detect clinically meaningful differences.(10) Health Canada has similar guidance (https://www.hc-sc.gc.ca/dhp-mps/brgtherap/applic-demande/guides/biosimilars-biosimilaires-eng.php). In addition, the FDA requires consideration to be given to comorbidities, concomitant medications, and inter-individual variability; and the EMA requires homogenous populations to be used, so that changes in response can be attributed to the biosimilar.

Immunogenicity may compromise efficacy by preventing drug binding at the target site and may cause safety concerns, including anaphylaxis and neutralization of endogenous proteins.(11) Assays for neutralizing and non-neutralizing antidrug antibodies (ADAs) and reference preparations for most biologics are not currently standardized internationally, making it impossible to compare biopharmaceutical and biosimilar immunologic test results from different laboratories.(12) In addition, numerous factors can affect immunogenicity. These include product-related factors, such as sequence variation, glycosylation, host cells, contaminants and process-related impurities, formulation, and handling and storage. Relevant patient factors include the route of administration, dose and treatment duration, concomitant diseases and/or medications, and genetic factors. Although numerous factors have been identified, it is likely that many determinants of immunogenicity remain unknown.

A variety of case series, retrospective and prospective studies, and postmarketing registries have found the infliximab biosimilar CT-P13 to have comparable efficacy and safety to infliximab for induction and maintenance in patients with IBD.

Substitution of CT-P13 for infliximab

Due to the cost savings associated with biosimilars, which are estimated to be in the range of 30%, both public and private payors in Canada will reimburse biosimilars, although exactly how switching will be implemented has yet to be determined.

NOR-SWITCH evaluated the efficacy, safety, and immunogenicity of switching from infliximab to CT-P13 (n=240) compared with remaining on infliximab (n=241) in a 52-week, randomized, double-blind, noninferiority trial, with the noninferiority margin set at 15%.(14) The trial included patients with a variety of conditions, and disease worsening was the primary outcome. NOR-SWITCH found that outcomes in patients who switched were noninferior to those in patients who remained on infliximab. However, the study design has been criticized, as the 15% noninferiority margin has been considered to be too large. Also, subgroup analysis for patients with IBD found a 15% greater relapse rate in the CT-P13 group than in the infliximab group, which is clinically significant.

The critical question with switching from biologics to biosimilars is multiple switches, or interchangeability, which has not been addressed by any trial to date.

Biosimilars, which may offer a more cost-effective option for managing chronic disease than originator biologics, are comparable to originators in functional and clinical activity, although biosimilars cannot be considered simply generic biologics. Because immunogenicity is largely unpredictable, it is important for biosimilars to undergo a thorough risk-benefit analysis and to be followed using robust postmarketing risk management programs and for clinicians to monitor efficacy and safety carefully in patients receiving treatment with biosimilars. Interchangeability, the most critical issue for biosimilars, has yet to be addressed.

Your 23-year-old female patient was diagnosed with ulcerative colitis (UC) in Ontario 6 months ago. The records are incomplete, but sigmoidoscopy suggested left-sided colitis with normal mucosa above the sigmoid. No biopsy results are available. She has been on oral mesalamine since the diagnosis and recently moved to Alberta to attend university. She presents to you with a 3-month history of worsening diarrhea with bleeding despite mesalamine therapy. Relevant tests completed before she arrived for the consultation are:

Her colonoscopy shows pancolitis, biopsy-confirmed normal ileum, and deep ulcers extending up from the rectum and transverse colon. Biopsies are compatible with severe active UC.

Therapy with a TNF-α inhibitor has been shown to be highly effective in patients with UC. High-risk factors suggesting the need for accelerated step-up therapy to biologics include pancolitis, younger age, shorter disease duration, elevated CRP, low hemoglobin and albumin, and deep colonic mucosal ulceration on endoscopy.

Biologic therapy is warranted in this patient due to the failure of mesalamine therapy and the high-risk features. Response would be expected to be near 85%. A tapering course of steroids should be considered when initiating the biologic to enhance induction efficacy and minimize ADAs. An alternative therapy would be a tapering course of a corticosteroid + azathioprine. The expected response rate with this therapeutic approach would be 40%. Careful follow-up is required in this situation, given the potential for failure and the need to advance rapidly to biologic therapy in the event of treatment failure.

During the office visit with your patient and her mother you explain the high-risk nature of her disease (i.e., the deep ulceration and pancolitis) and suggest therapy with a tapering course of a corticosteroid (prednisone 40 mg tapered) and a TNF-α inhibitor. The patient agrees to this course of therapy. Your IBD nurse informs you that your patient’s insurance plan will pay for either an originator or a biosimilar biologic. The mother asks if the originator and the biosimilar TNF-α inhibitor are equally safe and effective.

Preliminary results of CT-P13 in IBD from small postmarketing registries and short-term case series suggest comparable efficacy and safety to infliximab. A prospective multicentre Hungarian study (N=210) evaluating CT-P13 in patients with IBD found no difference from the originator in immunogenicity, side effects, or efficacy up to 30 weeks of therapy.(15) In addition, use of biosimilars in rheumatoid arthritis and in IBD has found no new adverse events.

Your patient, a 26-year old IT consultant, with well-documented jejunal and ileal Crohn’s disease (CD), is in endoscopic remission on his TNF-α inhibitor and azathioprine (150 mg/d). He has been on this treatment for 7 years and in endoscopic remission (confirmed by double balloon and computed tomography enterography) for at least the last 4 years. His insurance plan now mandates a switch to a biosimilar. He comes to your office and asks about the risks and benefits of switching his TNF-α inhibitor to a biosimilar.

The FDA approved CT-P13 (Inflectra®) in April 2016 for adult and pediatric patients (≥6 years of age) with moderate-to-severe CD who have had an inadequate response to conventional therapy. The FDA approval does not give the drug interchangeability status, which requires a higher level of review than for biosimilarity. Health Canada approved Inflectra® in June 2016 for CD and UC.

Uncertainty still exists as to therapeutic interchangeability between originators and biologics. Although mandatory switch processes are in place in several European countries for both induction and maintenance, limited data exist about the effects of switching from a biologic to a biosimilar(14), and no data are available on the effects of switching multiple times. Research is evaluating whether treatment can be switched back and forth between the innovator and a biosimilar or between biosimilars of the same originator biologic. Since Inflectra® approval in 2013, several European registries are tracking efficacy, immunogenicity, and switch outcomes in clinical practice.

(c) Catrile & Associates Ltd., 2017. All rights reserved. None of the contents may be reproduced in any form without prior written permission from the publisher. The opinions expressed in this paper are those of the authors and do not necessarily reflect the opinions or recommendations of the sponsors, the grantor, or the publisher.