Sexuality and Sexual Function in IBD

Mentoring in IBD is an innovative and successful educational program for Canadian gastroenterologists that includes an annual national meeting, regional satellites in both official languages, www.mentoringinibd.com, an educational newsletter series, and regular electronic communications answering key clinical questions with new research. This issue is based on the presentation made by the contributing editors, Drs. Magali Robert and Cynthia Seow, at the annual national meeting, Mentoring in IBD XIX: The Master Class, held November 2, 2018 in Toronto, Ontario.

The World Health Organisation defines sexual health as a state of physical, mental and social well-being in relation to sexuality.(1) Inflammatory bowel disease (IBD) is a chronic disorder that can lead to significant morbidity and impairment in quality of life, including effects on sexual health (function and dysfunction). This aspect of quality of life is often overlooked in patients with IBD, possibly due to: an underestimation of the magnitude of the problem; gastroenterologists’ perceived lack of confidence or time to discuss the topic; a perceived lack of patient engagement and/or a perceived lack of resources to deal with the issues at hand.(2)

This review discusses the scope of the problem in IBD, as well as the role gastroenterologists can play in the investigation and management of problems with sexuality among their patients with IBD.

Human Sexuality: Some Definitions and Considerations

Sexual dysfunction is defined as difficulty in sexual functioning for a minimum of six months (excluding substance- or medication-induced dysfunction).(2) The dysfunction may involve any part of the sexual cycle: desire or arousal (hypoactive sexual desire disorder—”not in the mood”), orgasm (orgasmic disorder—”can’t perform”), or pain (sexual pain disorder—”it hurts”).(2)

One of the other aspects of sexuality to consider is patient self-identification / orientation. Statistics show that in Canada in 2004, 1.7% of the population self-identified as gay or lesbian and an additional 1.3% as bisexual.(3) Depending on the area of practice, these numbers may be considerably higher. There are also discordances between self-identification and orientation. For example, a New York City survey from 2003 reported that 12.4% of men reported sex exclusively with men in the 12 months prior to the survey. Most of these individuals (~70%) identified as heterosexual.(4) 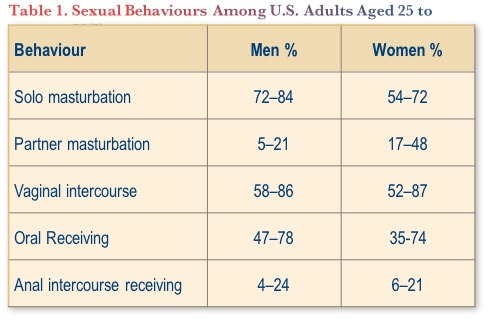 Sexual Dysfunction in IBD: Scope of the Problem

Determining the extent and type of sexual dysfunction among patients with IBD is a difficult task. There are numerous issues with the existing data that limit investigation into this problem. These include different study designs, different scoring tools (domain vs. disease specific), different comparator groups (other chronic diseases vs. general population), different outcome measures (frequency of sexual intercourse vs. sexual interest vs. sexual satisfaction), and confounders (comorbidities and medications).

One of the best sources we have documenting sexual function and dysfunction in IBD comes from a survey that included a total of 2569 respondents.(8) The survey was conducted in the USA, using the Crohn’s and Colitis Foundation Partners Internet Cohort. The participants completed a 6-question supplemental online survey to examine sexual interest and satisfaction using the Patient-Reported Outcome Measurement Information System® (PROMIS®) Sexual Function and Satisfaction measures. The key findings were that interest in sexual activity in men and women with IBD were comparable to the general population, but that: satisfaction with sex life was lower; sexual interest and satisfaction were inversely associated with disease activity; and other factors associated with lower interest and satisfaction and lowered IBD-specific quality of life included female sex, increasing age, fatigue, depression, pain and anxiety.(8) 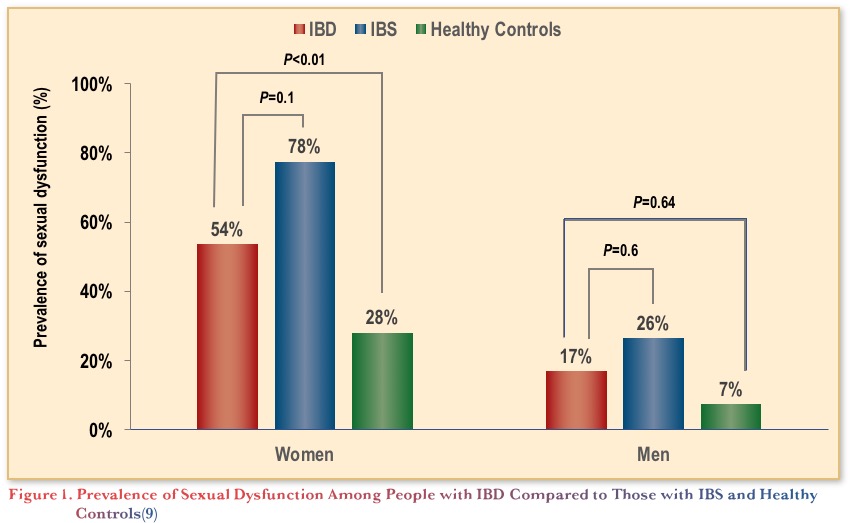 While the rates of sexual dysfunction overall were not significantly different for men with IBD vs. healthy controls, the survey did note that erectile dysfunction was reported by 43% of IBD patients, 55% of those with IBS (P=0.60 vs. IBD) and by 13% of healthy controls (P<0.01 vs. IBD).(9)

Investigation of Sexual Function in IBD

The reluctance to discuss sexual health with individuals with IBD is reflected in the relative paucity of data in this area. It may also be reflective of an underestimation of the magnitude of the problem, and/or a perceived lack of confidence: in discussing the topic, in clinical time to discuss the topic, in patient engagement and/or in resources to deal with the topic. Individual clinicians may also have a personal bias against discussing sexuality based on their own experiences.(10)

Gastroenterologists also lack an IBD-specific metric to investigate sexual function and dysfunction. This aspect of quality of life is, however, covered as one item in the IBD disk, a visual, self-administered tool for assessing disability in IBD.(11) In general, however, burdening gastroenterologists and their patients with another scoring system to monitor sexual function is not practical. Instead, clinicians can recognize that only a small minority of their patients will ever self-report sexual dysfunction and, as such, to find out about this important aspect of their patients’ lives, gastroenterologists need to be proactive and ask about it: e.g., “If it’s okay with you, I’ll ask you a few questions about sexual matters now.”(12) A helpful question to get things started might be: “Many people with IBD notice a change in their sexual life/health/function. Has this happened to you?” If the patient responds that it has happened to her/him, the follow-up question might be “Have you spoken to anyone about this?” The gastroenterologist might then provide some information about his or her own limitations in the field, while giving reassurance that help is available, e.g., “I am not an expert in the area but let me try and help you as this is an important problem.” This help might include referral to a colleague with more expertise in sexual health.

The resources one might draw on for a patient with issues with sexuality include primary care providers, gynecologists, urologists, surgeons, psychologists, counsellors and physiotherapists. In terms of web-based resources, there are many trusted sources to which gastroenterologists can direct their patients, including the following sexual health resources:

Information related to sexual health is also be available from some IBD-focused resources including:

A 17-year-old student with colonic Crohn’s disease has been taking maintenance infliximab and recently had a course of corticosteroids for a flare. This was associated with weight gain and acne.

The peak prevalence of IBD is in the young adult population. Adolescents with chronic diseases are more at risk for anxiety, depression, social isolation, and altered self-image. As many as two thirds of IBD patients report impaired body image.(13) In turn, there are significant associations between body image, intercourse frequency and active disease.(14) However, sexual function can also be impaired among IBD patients even in remission.(14) Key contributors to hypoactive sexual desire disorder, for example, include body image (in IBD, this may include extraintestinal manifestations), comorbid illnesses (especially depression) and effects of medication.(14)

For the latter, research has shown that 10% of patients omit doses due to a perceived link between medications and sexual dysfunction.(13) The potential links between medication and sexual function include the impact on body image (e.g., weight gain with corticosteroids), the direct impact on sexual function (e.g., with antidepressants, opiates) and the impact of medication(s) on disease control (e.g., thiopurines, biologics).

One of your patients is a 32-year-old engineer with ileocolonic and perianal Crohn’s disease. He has an ileostomy and previously had setons.

History of surgery is an important consideration for sexual health among patients with IBD. In this case, the patient’s stoma and setons would likely impact his sexual experiences. Stomas are associated with leakage, noise and odour, while aspects of seton placement that may impact sexual function include drainage, site irritation and/or pain. Both are often associated with impaired body image.

With respect to sexual function, it is important to consider the impact of surgery on the urogenital anatomy. There may be angulation of the vaginal vault, which is associated with pain and/or discharge. Functionally speaking, surgery may be associated with pelvic floor dissection and/or injury to autonomic nerve plexi.

The type of surgical technique used may also be a factor (e.g., staple vs. handsewn anastomosis).

Sexual dysfunction is common in IBD. Gastroenterologists should understand that they can contribute to the comprehensive biopsychosocial care of the patient by considering sexual health as part of the routine clinical assessment (you won’t know if you don’t ask) and by readily engaging other care providers, including gynecology, physical therapy, psychology and surgery, as appropriate.

(c) Catrile & Associates Ltd., 2019. All rights reserved. None of the contents may be reproduced in any form without prior written permission from the publisher. The opinions expressed in this paper are those of the authors and do not necessarily reflect the opinions or recommendations of the sponsors, the grantor, or the publisher.