Preventing Infection in the Era of Biologics

Mentoring in IBD is an innovative and successful educational program for Canadian gastroenterologists that includes an annual national meeting, regional satellites in both official languages, a website, an educational newsletter series, and regular electronic communications answering key clinical questions with new research. This issue is based on the presentation made by the contributing editor at the annual national meeting, Mentoring in IBD XVIII: The Master Class, held November 3, 2017 in Toronto, Ontario.

Modern therapies for IBD can put patients at risk for infections, including vaccine-preventable illnesses. Prevention of infection is critical for immunosuppressed IBD patients and, since many of these patients will have their gastroenterologist as the only regular contact among medical professionals, assessment for infection should be an integral component of gastroenterology care. This brief overview will discuss recommended infectious disease (ID) screening prior to immunosuppression, the types of vaccines that should be considered and the recommended timing for their administration relative to immunosuppression. In addition, the review will touch on specific infections to be aware of in immunosuppressed IBD patients.

Infectious Disease Screening Prior to Immunosuppression

Both active and latent infections should be considered in IBD patients. Some of the latter include tuberculosis and infections specific to certain geographic areas (e.g., Strongyloides and endemic fungi). Screening for these should be performed if exposure is suspected and testing is available.

Next, one should inquire about the past vaccination history and serologic screening should be done for important viral pathogens, including HIV, HCV, hepatitis B (HBsAg, anti-HBs, anti-HBc) and varicella zoster virus (VZV). If the patient was born after 1970, one should also consider serologic screening for measles, mumps and rubella (MMR). Research conducted in 2012 suggests that gastroenterologists in Canada do not typically inquire about vaccination status (Figure 1) among their patients with IBD.(1) The authors of this study referred to this as a “missed opportunity for preventing infection” in this population. 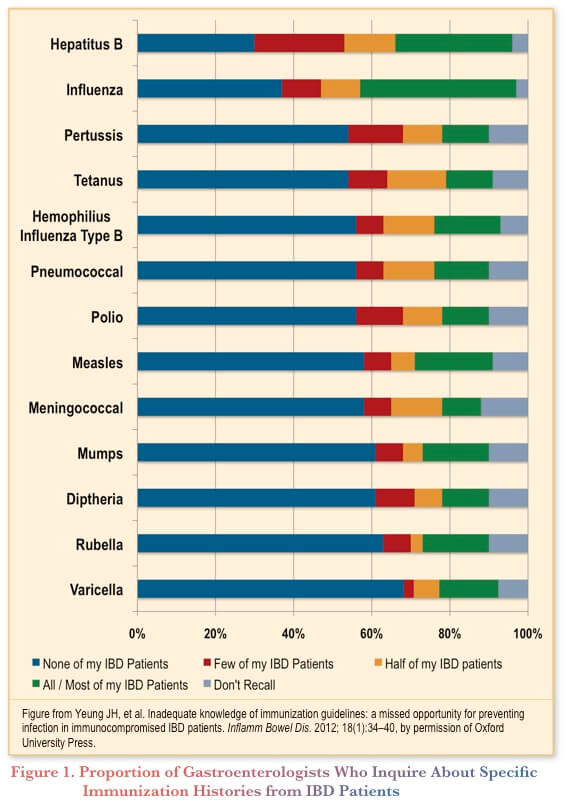 Recommended Vaccines and Timing of Initiation

Specific vaccines that are recommended among patients with IBD include those for influenza, pneumococcus, hepatitis B, human papillomavirus, MMR, varicella and shingles (Table 1).(2) Research has shown that vaccine seroprotection can be suboptimal among IBD patients receiving immunosuppressants, including TNF inhibitors.(3) The timing of administration is, therefore, critical to optimizing protection against infection. 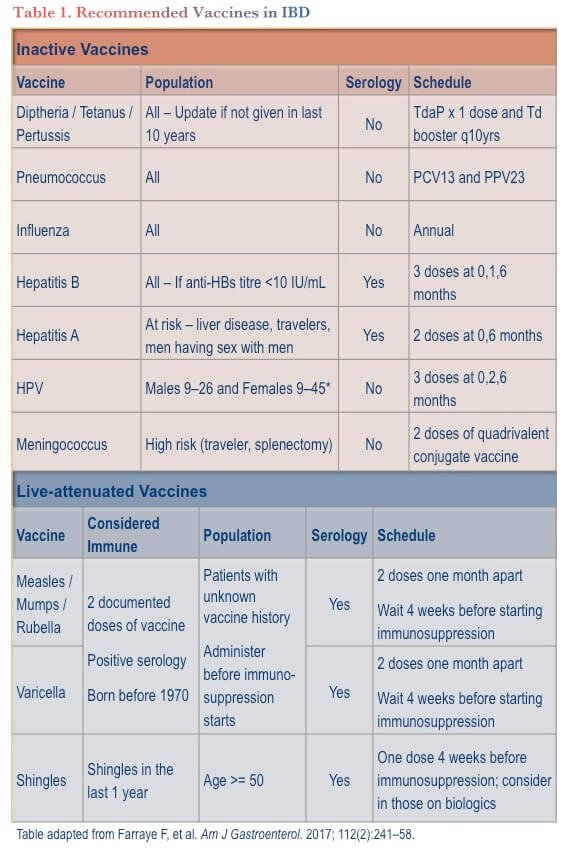 Zoster infection is an area of particular concern in IBD. A retrospective US database analysis showed that the annual zoster incidence was 734 per 100,000 among individuals with IBD, significantly higher than the 426 per 100,000 observed among non-IBD patients (Figure 2).(4) Data from the same study showed that greater immunosuppression was associated with significantly higher risk of zoster infection, with combined use of thiopurines and anti-TNF therapy being associated with the highest risk (Table 2). 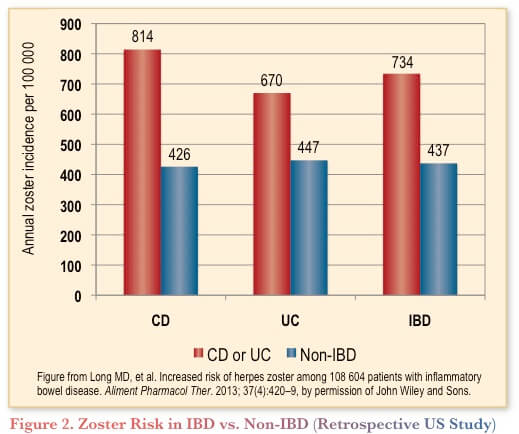 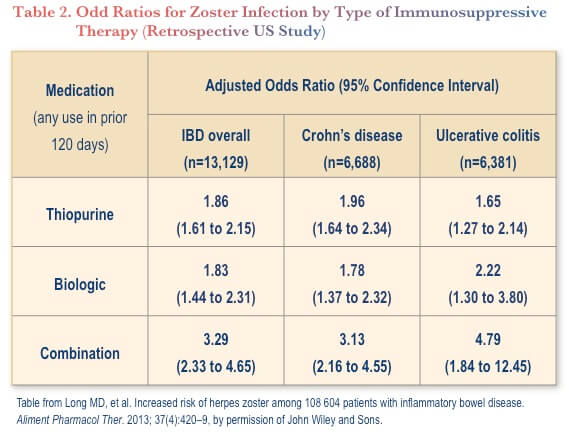 With respect to vaccination, although live vaccines have generally been contraindicated while on biologic therapy, there are emerging data to suggest safety of live shingles vaccination in patients receiving biologic therapy.(5) In a retrospective study of U.S. Medicare patients aged >60 years with autoimmune conditions (n=463,541, including 66,751 with IBD), 4% received a live shingles vaccine and had a median of two years of follow-up. The risk of zoster infection was significantly lower among the vaccinated vs. unvaccinated individuals: 6.7 vs. 11.6 per 1000 patient years (rate ratio 0.58, P<0.0001).(5) Among patients taking biologics, the infection rates were 8.5 and 16.0 per 1000 patient-years for vaccinated and unvaccinated patients, respectively. In addition to this study, a smaller analysis of the U.S. Veterans Affairs database showed that among 59 anti-TNF-treated patients with IBD who were vaccinated with the live shingles vaccine, there were no adverse events noted out to six weeks.(6) The use of shingles vaccine among patients aged 50 or older taking anti-TNF agents (across indications) is currently being prospectively investigated in the VERVE study of approximately 1,000 patients.(7) The trial is scheduled to finish in September 2019.

The current Canadian recommendations for live herpes zoster vaccination state that it is not indicated for immunocompromised patients who are taking corticosteroids >2mg/kg daily or >20mg/d, but can be given to individuals on low dose MTX / AZA / 6-MP for inflammatory conditions; and can be considered for people on biologics on a case-by-case basis.(8) These recommendations may change moving forward, as a new, non-live, adjuvanted shingles vaccine was approved for use in Canada in October 2017.(9) In the pivotal clinical trial (n>16,000 patients older than 50 years), this vaccine was 97.2% effective for the endpoint of confirmed herpes zoster.(10)

Beyond vaccination, gastroenterologists should maintain awareness that immunosuppressed IBD patients are at continued risk for infections.(11–13) Bacterial infections of particular concern include pneumonia, tuberculosis reactivation (especially among TNF-inhibitor-treated patients) and nocardia. Opportunistic fungal infections of note include histoplasmosis (specific risk in patients on TNF inhibitors) and pneumocystis (which has been described in patients on biologics and high-dose steroids). In addition to zoster, viral infections of note include CMV colitis (especially in severe steroid-refractory ulcerative colitis) and JC virus causing progressive multifocal leukoencephalopathy (PML) in patients on natalizumab. Parasitic infection with Strongyloides may also be a concern.

Patients with IBD, particularly those on immunosuppressant therapy, are at high risk of infections relative to the general population. Gastroenterologists, who are often the only physicians regularly seen by patients with IBD, are well positioned to help reduce this risk. Inquiries about vaccination history should be part of the initial workup, with appropriate immunization recommendations made as early as possible, optimally before the start of immunosuppressive therapy.

Your patient is a 24-year-old law student who presents to your office with a three-year history of post-prandial lower abdominal discomfort with borderline microcytic anemia and elevated CRP. She is otherwise well. Colonoscopy shows a distorted ileocecal valve (ICV) preventing ileal intubation. Magnetic resonance enterography (MRE) shows extensive ileal disease with skip lesions and segmental dilation. Budesonide 9 mg PO daily is started. You ask if her vaccinations are up to date. She believes that she had all her childhood vaccinations and that she has had chicken pox.

IBD places patients at increased risk for developing vaccine-preventable illnesses, and this risk is further exacerbated by immunosuppressive therapy. The 2017 ACG guidelines on preventive care in IBD have the following recommendations that are applicable to this patient:(2)

All adult patients with IBD should undergo annual vaccination against influenza;

Adults with IBD should be assessed for prior exposure to varicella and vaccinated if naive before initiation of immunosuppressive therapy when possible;

Adults with IBD should receive age-appropriate vaccinations before initiation of immune suppression when possible; and

Vaccination against Tdap, HAV, HBV, and HPV should be administered as per Advisory Committee on Immunization Practice guidelines.

You elect to test for varicella, measles, mumps and rubella IgG, as well as HBsAb and HBsAg. At her next visit, you review the results. She tested positive for varicella, but negative for the rest of the tests. She tells you her family doctor also got her lab results and wants your guidance on vaccination.

Patients with IBD can receive all inactive vaccines, regardless of their level of immunosuppression.(2,14) However, live vaccines—such as the measles, mumps, and rubella (MMR) vaccine; the varicella zoster (chickenpox) vaccine; and the herpes zoster (shingles) vaccine should be used with caution in patients who are on high-level immunosuppression.(2)

Since this patient had yet to begin immunosuppressive therapy, all the options were currently on the table.

You decide she should receive HBV, MMR and conjugate pneumococcal vaccines. Unfortunately, she tells you her pain is worse. Her C-reactive protein (CRP) has also increased. You decide to start adalimumab and azathioprine in combination.

The high-level immunosuppression that the patient is about to start changes matters considerably with respect to her vaccination. The product monograph for adalimumab states that patients on adalimumab may receive concurrent vaccinations, except for live vaccines.(15)

The recommendations for caution with live vaccines in patients who are on high-level immunosuppression may not, however, be appreciated by the GI community. A 2011 study showed that one-third of gastroenterologists reported that they would incorrectly recommend a live vaccine to an IBD patient on a biologic therapy.(16)

Depending on the patient’s preferences, it may be wise to delay the start of the immunosuppressive therapies until after the administration of the MMR vaccine. Should the patient insist on starting the IBD medications right away, one could still administer the other vaccines (pneumococcal conjugate and HBV). Influenza vaccine (by injection, but not nasal spray) can also be given while on adalimumab.

A year after starting combination therapy, the patient reports a painful, itchy rash on her chest. She is in the middle of exams and stressed. Her family doctor is away, so you see her the next day. You make a clinical diagnosis of shingles and start oral valacyclovir. The patient asks if she should stop her medications.

The adalimumab product monograph(15) recommends stopping therapy in the event of serious infection. Stopping the immunosuppressants until the infection has cleared is a sound choice.

She responds well to antiviral therapy and the rash heals after 10 days. She tells you her father has had a vaccine against shingles and asks if she should also receive it.

The patient appears to be looking to take the vaccine. Note that both the varicella and the shingles vaccines are live and should not typically be administered to people who are on strong immunosuppressants.

Recurrences of herpes zoster infection are relatively common – an investigation published in 2011 showed an estimated recurrence rate of 6.2% over eight years.(17)

Should she be willing to delay restarting her medications for three months, you could administer the shingles vaccine, as it has been shown to reduce recurrences among those who have already had an infection, although the data on recurrence is largely limited to older populations (≥50 years years).(18) There are limited data for vaccine efficacy in her age group and, as such, we do not know how long the protection would last.

(c) Catrile & Associates Ltd., 2018. All rights reserved. None of the contents may be reproduced in any form without prior written permission from the publisher. The opinions expressed in this paper are those of the authors and do not necessarily reflect the opinions or recommendations of the sponsors, the grantor, or the publisher.