Mentoring in IBD is an innovative and successful educational program for Canadian gastroenterologists that now includes an annual national meeting, regional satellites in both official languages, a website, an educational newsletter series, and regular electronic communications answering key clinical questions with new research. This issue is based on the presentation made by the issue editor, Dr Shomron Ben-Horin, at the annual national meeting, Mentoring in IBD XV: The Master Class, held November 7, 2014 in Toronto, Ontario.

An important part of optimizing the management of patients treated with a tumour necrosis factor-α (TNF-α) inhibitor is therapeutic drug monitoring (TDM), or measuring drug and antidrug antibody (ADA) levels.

Correlation between drug and antibody levels and clinical outcome

Numerous studies have demonstrated that higher TNF-α inhibitor trough levels are associated with better clinical outcomes. A study of 168 patients with Crohn’s disease (CD) treated with adalimumab after infliximab failure, with a median 2-year follow-up, found that treatment discontinuation was correlated with low adalimumab trough levels, which were more common if ADAs were present.(1) Similarly, a study of 115 patients with ulcerative colitis (UC) treated with infliximab found detectable trough drug levels were associated with clinical remission, endoscopic improvement, and decreased risk for colectomy, whereas undetectable trough drug levels were associated with poorer outcomes, regardless of antibody status.(2)

Evidence also supports a relation between TNF-α inhibitor drug levels and control of inflammation, as demonstrated by mucosal healing. A prospective study of 82 patients with inflammatory bowel disease (IBD) who experienced a disease flare on adalimumab therapy measured drug and ADA levels before treatment optimization with weekly adalimumab.(3) The study found patients with subtherapeutic drug levels and undetectable ADAs had the most durable response after dose intensification, whereas treatment failure was associated with subtherapeutic drug levels and detectable ADAs before optimization. During the Active Ulcerative Colitis Trials (ACT-1 and ACT-2) data were collected on infliximab drug levels and outcomes in 728 patients with moderate-to-severe UC.(4) Analysis of this data found better clinical and mucosal healing outcomes and a lower rate of ADAs in patients with infliximab levels >3.7 μg/mL during maintenance therapy.

A population pharmacokinetic study that measured infliximab concentrations in 169 samples of patients with UC or CD found low albumin, low body weight, and ADAs to be significantly associated with high infliximab clearance (P≤.001).(5) This pharmacokinetic modelling predicted dose intensification based on TDM would result in substantially improved drug levels.

TDM in management of primary nonresponse

In contrast with infliximab, a growing body of evidence implicates low drug levels as an important cause of some adalimumab induction failures and suggests a possible benefit of individually intensified induction dosing. The Clinical Assessment of Adalimumab Safety and Efficacy Studied as Induction Therapy in Crohn´s Disease (CLASSIC) I trial, a dose-ranging study, demonstrated a linear dose-response relation.(10) Optimal Week 4 remission rates were seen with the highest induction dose evaluated (160 mg at Week 0 and 80 mg at Week 2). In addition, analysis of adalimumab trough data collected during the Ulcerative colitis Long-Term Remission and maintenance with Adalimumab (ULTRA) 2 trial correlated trough concentration quartiles at Week 8 with clinical remission and response using the full Mayo score for 518 enrolled patients with moderate-to-severe UC.(11) The analysis demonstrated a relation between adalimumab trough levels and response and remission during induction, suggesting that dosing regimens providing higher trough levels could increase efficacy in some patients. Providing somewhat of a contradiction to these data, molecular fluorescent antibody imaging has found that low tissue TNF-α levels predict a lack of response to adalimumab, indicating that, in some patients, adalimumab failure may be caused by inflammation not mediated by TNF-α.(12)

TDM in management of loss of response

For patients with secondary loss of response, TDM offers a noninvasive test which, when coupled with C-reactive protein (CRP) levels and/or fecal calprotectin test results, may be useful in diagnosing the underlying etiology of a clinical flare and guiding management decisions.

Dose intensification can produce short-term response in a significant proportion of patients (Figure 1).(13) 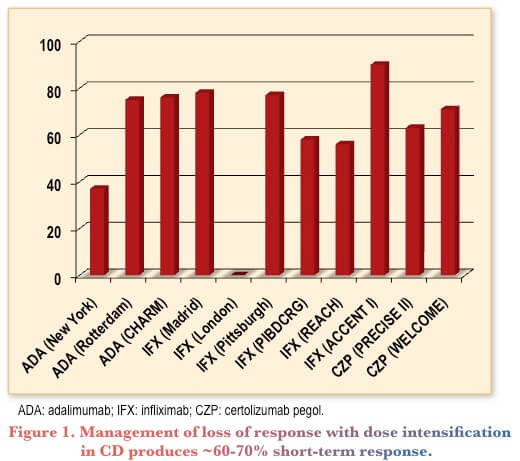 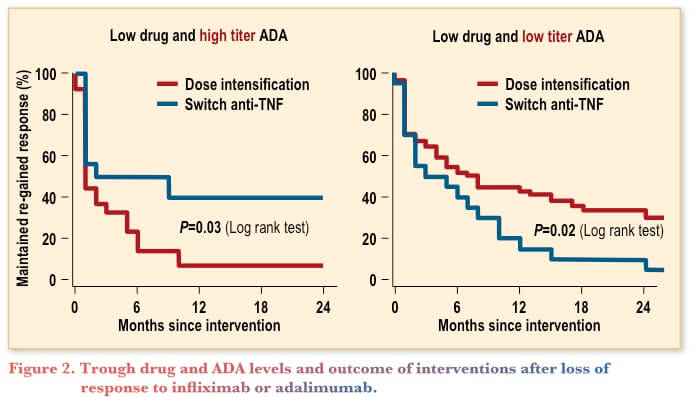 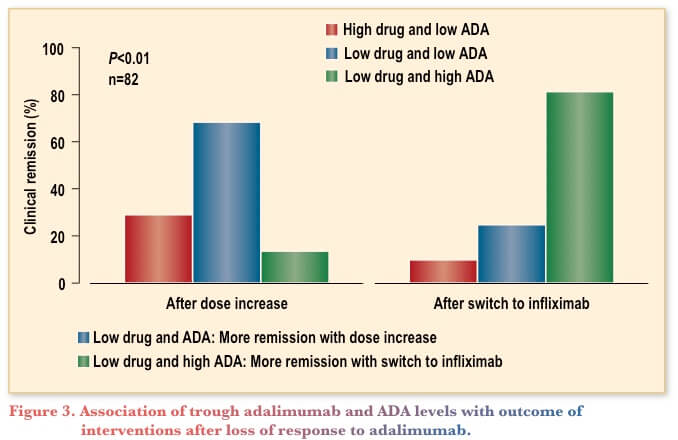 If a switch to another TNF-α inhibitor is necessary, the response rate to a second agent may not be as high as to the initial one. Subgroup analysis of data from ULTRA 2 illustrates this point, as clinical response and remission were lower in the 98 adalimumab-treated patients who had previously received TNF-α inhibitor therapy than in the 150 patients who were TNF-α inhibitor naïve.(15)

Possible mechanisms of loss of response

A recent European Crohn’s and Colitis Organisation workshop focused on failure of TNF-α inhibitor therapy in IBD with the objective of better understanding primary nonresponse and secondary loss of response.(16) The workshop publication summarized the variety of mechanisms that may be involved in drug failure (Table 1). 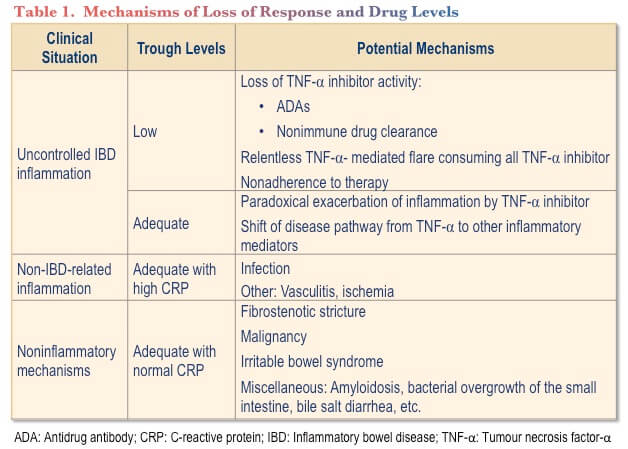 One important but sometimes overlooked factor in evaluating loss of response is adherence. As studies indicate that 15 to 29% of patients treated with infliximab or adalimumab have missed at least one injection or infusion during the past 3 months, it is critical to determine adherence when investigating the cause of the loss of response.(17,18)

Adequate investigation of loss of response involves TDM, endoscopy, imaging, CRP, calprotectin, and additional tests as necessary. Routine use of a TDM-based algorithm, with ADA and trough levels guiding therapeutic decision-making, rather than universal dose intensification, can significantly reduce treatment costs (P<.001) without negatively affecting outcomes.(19) One such algorithm for managing loss of response encompasses investigations and clinical decision-making (Figure 4).(20) 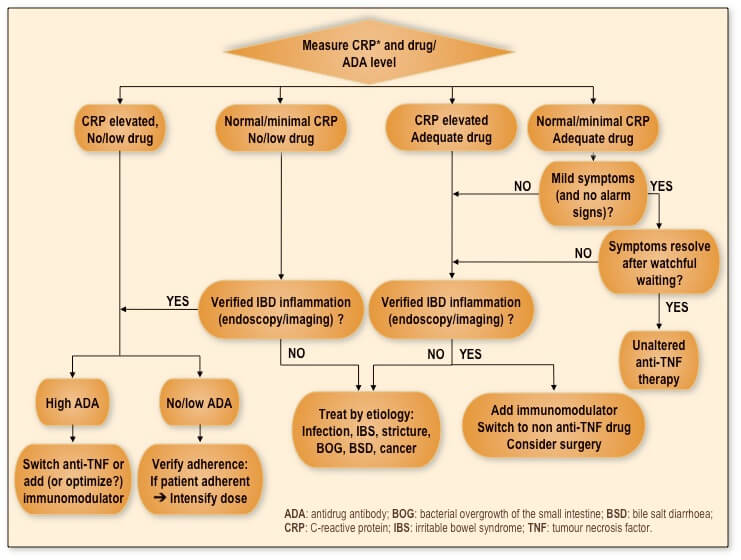 Interpretation of drug and ADA results, which is not always simple, should consider the clinical context in which the blood test was obtained (Table 2). For instance, several possible reasons exist for a finding of undetectable trough drug levels, depending on the patient’s clinical status. Management strategies may vary considerably, based on differences in the patient’s clinical status at the time of measurement.(19) 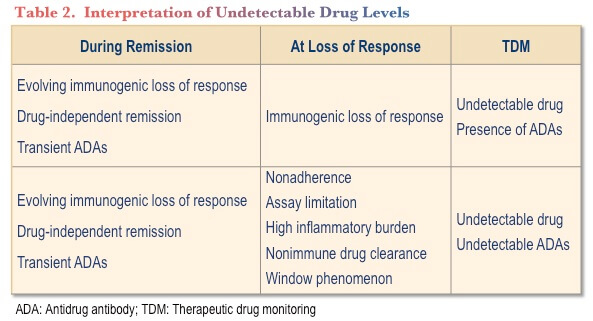 Measurement of infliximab trough and ADA levels in 1,232 serum samples collected from 90 patients with IBD allowed a retrospective study to correlate ADA formation and kinetics with trough drug levels, inflammatory markers, and clinical status.(22) The analysis determined that transient ADAs seldom resulted in loss of response, but sustained high ADA levels led to permanent loss of response. In addition, low trough levels at Week 14 were associated with a risk of ADA formation and infliximab discontinuation. Similarly, a retrospective study of patients with IBD who developed ADAs to infliximab investigated variations in ADA levels and their relation to clinical status. Among patients responding to infliximab, ADAs to infliximab disappeared in two-thirds of patients after 3 to 5 infusions, whereas among patients without clinical response, ADAs persisted.

A prospective observational study of 125 patients with IBD treated with infliximab measured ADA and trough drug levels in 1,119 serum samples.(23) Serial measurement demonstrated that transient ADAs could develop at any time during therapy, be present at low levels, and disappear spontaneously. In contrast, persistent ADAs tended to appear within the first 12 months of therapy (P<.001), to precede clinical loss of response, and to develop less frequently in patients receiving concomitant immunomodulator therapy.

TDM is an important tool in the management of patients treated with TNF-α inhibitors, but interpretation of TDM findings requires comprehensive evaluation of the clinical situation. Evidence for the benefit of TDM in managing primary nonresponse is beginning to accumulate, but this TDM application has not yet been established. In contrast, measurement of ADA and trough levels has proved useful for diagnosing the etiology of loss of response and determining the most appropriate intervention, in conjunction with determining adherence to treatment and investigating both inflammatory and noninflammatory causes. For patients in remission, TDM may improve efficacy if subtherapeutic drug levels exist and reduce costs if supratherapeutic trough levels are found, without affecting efficacy.