Mentoring in IBD is an innovative and successful educational program for Canadian gastroenterologists that now includes an annual national meeting, regional satellites in both official languages, a website, an educational newsletter series, and regular electronic communications answering key clinical questions with new research. This issue is based on the presentation made by contributing editor, Dr Subrata Ghosh, at the annual national meeting, Mentoring in IBD XV: The Master Class, held November 7, 2014 in Toronto, Ontario.

Treat-to-target is an established concept in several chronic inflammatory diseases and an evolving one in inflammatory bowel disease (IBD). Judging treatment success and failure only by symptoms may leave a considerable reservoir of subtle untreated inflammation that may lead to tissue damage and disability. An international group, under the auspices of the International Organization for the Study of Inflammatory Bowel Diseases, is working to finalize the treatment targets for IBD, with the objective of changing the disease course. The time to achieve the target is thought to be as important as reaching the target itself, and trials are now underway to test whether a time-sensitive treat-to-target approach is superior to more conventional approaches. 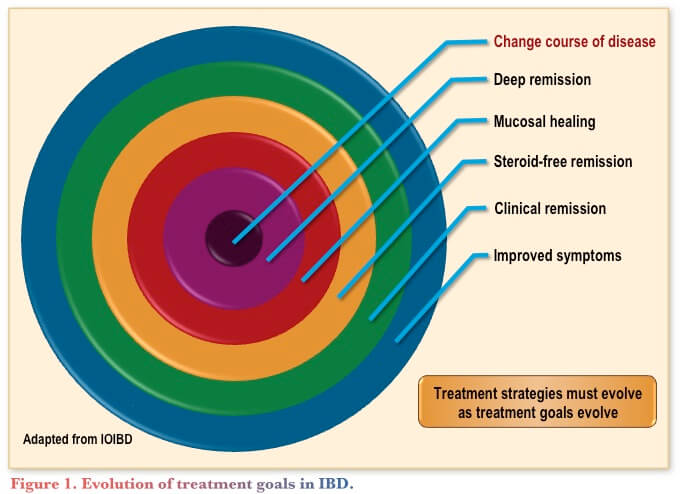 Extensive research has identified predictors of poor outcome in patients with Crohn’s disease (CD).(7) These include young age at diagnosis and disease severity and extent. An observational study of 102 patients with active ileocolonic disease assessed the risk of colectomy in patients with severe endoscopic lesions, defined as extensive and deep ulcerations covering more than 10% of the surface area of at least one colonic segment.(8) The presence of severe endoscopic lesions at the index colonoscopy independently predicted colectomy with a relative risk (RR) of 6.72 (95% confidence interval [CI] 2.26–20.03).

The EXTend the Safety and Efficacy of Adalimumab Through ENDoscopic Healing (EXTEND) trial (10) randomized patients with moderate-to-severe ileocolonic CD and active mucosal ulceration to adalimumab (n=62) or placebo (n=61). Patients with early CD (<5 years duration) had higher rates of mucosal healing (40%, 4/10) with adalimumab than those who had CD ≥5 years (21%, 9/43, P=.029).

Furthermore, a retrospective, registry-based study that included 425 patients with CD assessed phenotypic factors that predicted the need for surgery.(11) Complications associated with longstanding disease, such as strictures (adjusted hazard ratio [HR] 6.17, 95% CI 2.81–13.54) and fistulas (adjusted HR 3.39, 95% CI 1.45–7.92), were significantly associated with the need for surgery. These data support the concept that early treatment during the inflammatory stages of CD results in better outcomes than treatment later in the disease course.

One way to optimize treatment in patients with CD is to combine a tumour necrosis factor-α (TNF-α) inhibitor with an immunomodulator. The Study of Biologic and Immunomodulator Naive Patients in Crohn’s Disease (SONIC) compared the rates of mucosal healing achieved with treatment with azathioprine, infliximab, and the combination at 26 weeks.(1) SONIC found a 43.9% rate of mucosal healing in the group receiving combination therapy (n=107), significantly higher (P≤.001) than in the group receiving azathioprine (16.5%, n=109) and higher (P=.055) than in the group receiving infliximab (30.1%, n=93). The benefit of combination therapy likely reflects both reduced immunogenicity and synergistic efficacy.

It is well known that persistent inflammation results in tissue damage. The concept of treat-to-target rests on treating residual inflammation in patients who may be in clinical remission to prevent tissue remodelling. Treating clinically silent inflammation represents a paradigm shift in practice, and requires greater use of objective monitoring tools to assess whether treatment goals are achieved.

A prospective patient registry included 181 patients with CD with good quality of life, measured by the short inflammatory bowel disease questionnaire (SIBDQ) and same-day C-reactive protein (CRP) results.(13) CRP was elevated in 24% (n=43) of patients. Over 24 months, hospitalization rates were 37% (16/43) among those with elevated CRP and 7% (9/138, P<.001) among those with normal CRP. Multivariate analysis found CRP elevation to be significantly associated with hospitalization (odds ratio [OR] 6.82, 95% CI 2.50–18.58, P<.0001) after adjusting for covariates. This 6-fold greater risk of hospitalization indicated that patients with CD who are clinically well could benefit from closer monitoring to prevent disease-related complications.

A study to correlate endoscopic activity, CDAI scores, and CRP in CD with fecal calprotectin and lactoferrin enrolled 77 patients.(14) The Crohn’s disease index of severity (CDEIS) was scored during ileocolonoscopy. The study found a significant correlation between CDEIS and fecal calprotectin and lactoferrin (P<.001). These measures were more sensitive for endoscopic disease activity than was the CDAI.

A subanalysis of the infliximab diSconTinuation in CrOhn’s disease patients in stable Remission on combined therapy with Immunosuppressors (STORI) trial evaluated the utility of close monitoring of CRP and fecal calprotectin to predict relapse in 113 patients, 51 of whom relapsed after infliximab discontinuation.(16) Values linked to short-term relapse were CRP >5 mg/L (HR 4.2, 95% CI 1.9–9.2, P=.001) and fecal calprotectin levels >250 μg/g (HR 6.5, 95% CI 2.7–15.6, P<.001). 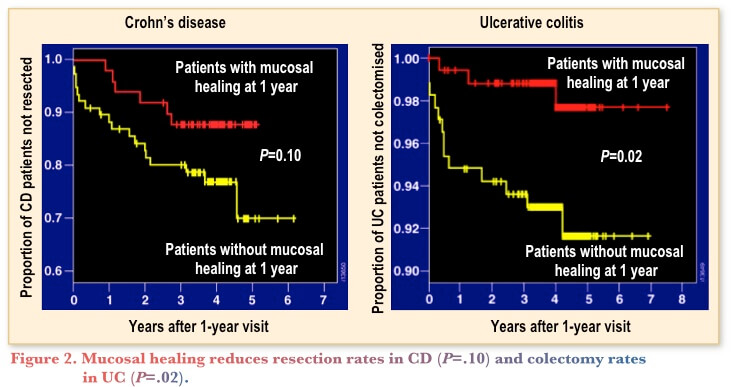 If mucosal healing is to be used as a treatment target, it requires a working definition. Currently, the proposed definition in CD is the absence of ulcers greater than 5 mm in diameter. Quantitative endpoints, such as CDEIS or the simple endoscopic score for Crohn’s disease (SES-CD) are more responsive to change but complex as a treatment goal. Although mucosal healing is associated with relevant long-term outcomes, no evidence supports treating to these goals.

The Randomized Evaluation of an Algorithm for Crohn’s Treatment (REACT), a cluster randomization trial, compared the effectiveness of early combined immunosuppression with conventional management in patients with CD in community gastroenterology practices, using an algorithm to treat-to-target.(19) The trial did not meet the primary endpoint, as the early treatment strategy did not increase the proportion of patients with Harvey-Bradshaw Index (HBI) <5 and no corticosteroid therapy at 12 months. However, early combined immunosuppression was significantly more effective in achieving secondary outcomes (complications, surgery, and the combined secondary outcome of complications, surgery, and hospitalization) with an adjusted HR of .74 (P<.001). These community data demonstrate that short-term symptom changes are not an appropriate treatment target, and that early combined immunosuppression may be effective in preventing CD-related complications.

In EXTEND, deep remission was defined as clinical remission (CDAI <150) with complete mucosal healing. Deep remission at Week 12 was associated with the following outcomes at Week 52 (P<0.05): better quality of life, less impairment of activity and less hospitalization.(4,20) Of note, these 1-year data are considered exploratory, as the primary endpoint of mucosal healing at Week 12 was not reached (P=.34).

Few data exist on long-term maintenance of remission with TNF-α inhibitors. The Additional Long-Term Dosing With HUMIRA to Evaluate Sustained Remission and Efficacy in CD (ADHERE) study, the long-term open extension of the CHARM study, evaluated maintenance of clinical remission over 4 years with adalimumab, in patients with moderately to severely active CD.(21) Of 329 early responders randomized to adalimumab induction, at least 30% achieved remission (99/329) or response (116/329) at Year 4, with 54% of patients in remission at Year 1 maintaining remission at Year 4. 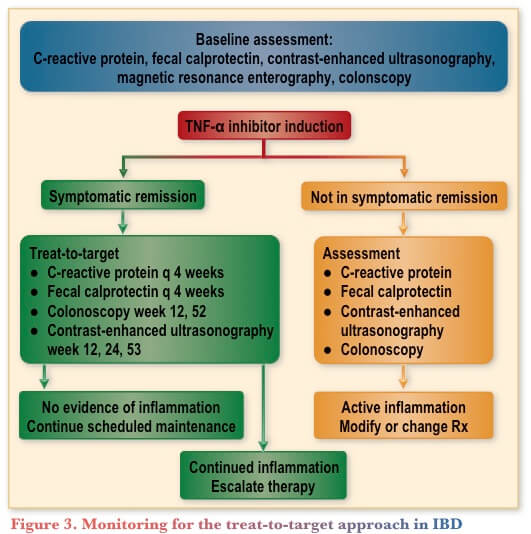 Enough evidence now exists to support adoption of a treat-to-target approach in patients with IBD. Symptom control does not mean control of inflammation. Patients should be stratified for risk, and treatment efficacy should be monitored frequently using objective tools to minimize or eliminate tissue damage (Figure 4). When disease activity is not adequately controlled, treatment should be modified to ensure long-term success.

You are seeing a new referral sent to you by the emergency department because of an abnormal computed tomography (CT) scan that showed thickening of the terminal ileum. The patient is a 27-year-old male with a 7-month history of 3 kg weight loss. He has vague abdominal discomfort with eating and thus has some food avoidance, but there is no change in bowel habits that he can convincingly describe.

Family history identifies a maternal aunt with an ileostomy from an unknown gastrointestinal disorder.

Physical examination demonstrates tenderness in the right lower quadrant with fullness but no distinct mass. Perianal examination reveals at least 6 fistula sites with one identifiable opening 5 cm from the anus. Investigations reveal the following:

CT enterography (CTE) demonstrates two 5 cm segments of active inflammation in the midjejunum, a 50 cm segment of active disease in the ileum approximately 10 cm from the Ileocecal valve, and thickening of the transverse colon. Adjacent to the ileal segment is a phlegmon (5 x 4 x 3 cm). Colonoscopy shows deep fissuring ulceration in the rectum and the sigmoid and transverse colon. Magnetic resonance imaging (MRI) demonstrates a complex perianal fistula with multiple trans-sphincteric fistula tracts but no abscess.

This very high-risk patient has multiple risk factors and requires early aggressive therapy, including surgical fistula management with placement of setons if possible, and drainage of the phlegmon, if it turns out to be an early abscess. With complex fistulizing disease, this patient has a high risk of sphincter damage. Initiation of combination therapy is also appropriate. Inpatient treatment initiation would be ideal, to allow close monitoring of his progress.

Prednisone may not have a role in patients with fistulizing disease. Antibiotics are important to cover the patient when the TNF-α inhibitor is initiated, as use of biologics in the presence of a phlegmon is a concern, due to the risk of abscess. A longer course of metronidazole may be needed in a patient with draining fistulas.

You set into place the objective monitoring protocol you learned at Mentoring in IBD XV. It is now 12 weeks into the induction phase of your treatment, and you are seeing the patient in your office to assess his response and determine your maintenance therapeutic strategy. He is feeling better, but the fistulae are still draining. Ultrasound demonstrates the phlegmon is still there, although it is smaller (2 x 2 x 2 cm). His CRP is 21.

This patient may not achieve remission by 12 weeks. Azathioprine and TNF-α inhibitor drug levels at the end of induction would be useful to indicate whether therapeutic levels were present.

Based on the results of your investigations you escalate therapy by doubling the TNF-α inhibitor dose.

This high-risk patient needs frequent follow-up. Objective monitoring should include a complete blood count, liver function tests and CRP, weekly for the first 6 weeks, then monthly for 6 months, then based on the clinical response. Baseline fecal calprotectin would also be useful. Imaging with MRI, low-dose CT, or ultrasound a few weeks after treatment initiation would provide objective information about the status of the phlegmon. Pelvic MRI and colonoscopy at 4 to 6 months can confirm clinical status.

Following your objective monitoring plan, you see the patient again 8 months after the start of his therapy. He is now feeling great. He ranks his well-being as 9 out of 10 and has a HBI of 3 indicating full clinical remission. His fistulae have not drained for the last month. You proceed to colonoscopy and repeat the CTE. Colonoscopy demonstrates residual ulceration in the transverse colon, with the rest of the colonic mucosa healed. CTE demonstrates hyperemia at the site of the jejunal lesions. The ileum is healed and the phlegmon is resolved.

With clinical remission and endoscopic disease activity, treating to mucosal healing may require a longer duration of the same therapy, dose escalation, or a change in therapy. It is important to discuss these options with the patient. It is appropriate to wait and reassess with repeated colonoscopy before intensifying or changing therapy.