Mentoring in IBD is an innovative and successful educational program for Canadian gastroenterologists that now includes an annual national meeting, regional satellites in both official languages, a website, an educational newsletter series, and regular electronic communications answering key clinical questions with new research. This issue is based on the presentation made by the issue editor, Dr Peter Lakatos, at the annual national meeting, Mentoring in IBD XV: The Master Class, held November 7, 2014 in Toronto, Ontario.

Ongoing inflammation in Crohn’s disease (CD) results in cumulative tissue damage, but current evidence indicates that tailored therapy and objective patient monitoring can alter the course of the disease (Figure 1).(1) Many patients with ulcerative colitis (UC) also experience disease progression: up to 20% undergo colectomy within 10 years and 30% within 25 years (Figure 2).(2) Early and aggressive intervention in patients with severe disease may improve long-term outcomes. 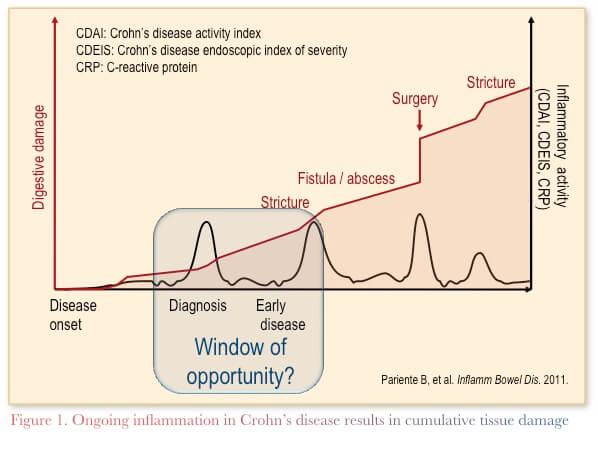 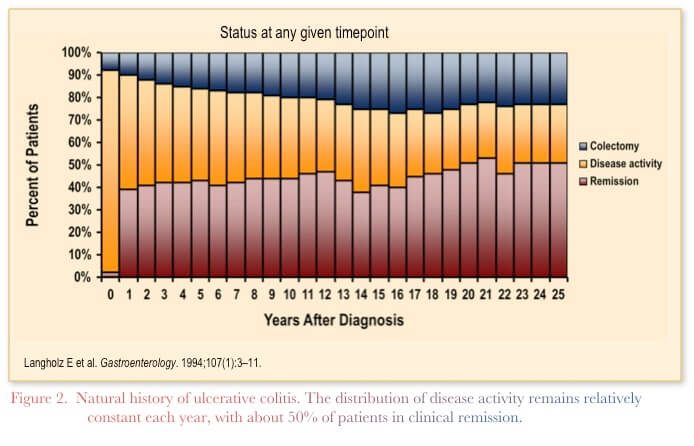 Several patient and disease characteristics can help to identify patients who have an increased risk of an aggressive disease course.(3) It is important to identify these patients as early as possible to allow treatment optimization with the intent of altering the course of disease. Tight monitoring of clinical status can assist in this goal. In turn, implementation of tight monitoring requires a priori definition of the goals of treatment (Table 1). Objective assessment of disease activity is needed when setting these targets, as the presence or absence of symptoms is not a reliable indicator of inflammation and disease activity. 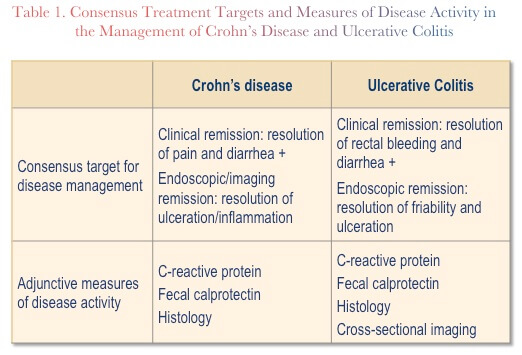 Levels of specific disease markers, such as C-reactive protein (CRP) and fecal calprotectin, parallel endoscopic or histologic disease activity, and elevated levels in patients with quiescent disease predict near-term relapses in both CD and UC. These disease markers may have clinical utility for prognosis at diagnosis, short-term prediction of disease activity, and long-term prediction of prognosis, disease complication risk, postoperative recurrence risk, and treatment optimization.

CRP levels can also predict relapse among patients in remission. Consigny et al evaluated data from a previous therapeutic trial of 71 patients with CD, looking for biological markers of near-term relapse.(6) Multivariate analysis identified 2 markers predictive of relapse: CRP >20 mg/L and ESR >15 mm. This information was used to develop a binary biological predictive score. The score was negative when both markers were below the cut-off value and positive when they exceeded that value. The relative risk (RR) of short-term relapse associated with a positive score was 8.0 (95% confidence interval [CI] 2.8–22.9). The score predicted relapse within 6 weeks with a sensitivity of 89% and a specificity of 43%. Kiss et al classified 260 patients with CD according to CRP levels at diagnosis.(7) An elevated CRP level at diagnosis was an independent predictor of 3-month (P=0.007) and 12-month (P=0.001) clinical relapse among patients in remission.

CRP levels can also help to predict outcomes of treatment. Using data collected during the A Crohn’s Disease Clinical Trial Evaluating Infliximab in a New Long-term Treatment Regimen (ACCENT) I trial, Reinisch et al evaluated CRP at baseline and after infliximab induction therapy at 14 weeks as a predictor of maintaining response or remission through 54 weeks among patients with CD who responded to induction.(8) Higher baseline CRP levels (≥0.7 mg/dL) were significantly associated with maintained remission, and CRP levels that had normalized at week 14 were associated with an increased chance of maintaining response or remission over 1 year of infliximab therapy. Travis et al studied whether early changes in inflammatory markers or other variables could predict 1-year outcomes among 51 episodes of severe colitis.(9) His data indicated that 85% of patients with stool frequency >8 or stool frequency 3 to 8 plus CRP >45 mg/L at 3 days required colectomy during that admission.

D’Haens et al examined the relation between fecal calprotectin levels and endoscopic disease activity in 126 patients with IBD and 32 patients with IBS undergoing colonoscopy and found significant correlations with endoscopic disease scores in both CD and in UC.(13) In CD, calprotectin levels <250 μg/g predicted endoscopic remission (Crohn’s Disease Endoscopic Index of Severity [CDEIS] ≤3) with 94.1% sensitivity and 62.2% specificity. In UC, calprotectin levels >250 μg/g predicted active mucosal disease activity (Mayo score >0) with a sensitivity of 71.0% and a specificity of 100.0%, and levels significantly correlated with symptom scores (r=0.561, P<0.001).

In a subanalysis of the infliximab diSconTinuation in CrOhn’s disease patients in stable Remission on combined therapy with Immunosuppressors (STORI) trial that involved close monitoring of both CRP and fecal calprotectin, de Suray et al found that elevated levels of CRP and fecal calprotectin were associated with an increased risk of short-term relapse and the combination may increase specificity.(15)

Ho et al investigated the utility of fecal calprotectin in predicting colectomy and corticosteroid and infliximab nonresponse in 90 inpatients with acute severe UC.(16) Fecal calprotectin was dramatically elevated and significantly higher among patients who went on to colectomy.

Lin et al performed a meta-analysis of 13 studies, which included 744 patients with UC and 727 patients with CD, assessing the diagnostic accuracy of fecal calprotectin in differentiating between active IBD and remission at several cut-off values (Table 2).(18) 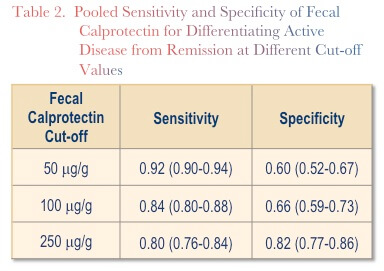 Anemia is an important and prevalent surrogate measure of disease activity in IBD and is usually due to iron deficiency, chronic diseases, vitamin deficiencies (e.g.B12 or folate), or a combination.(19) Differentiating between these causes is critical for appropriate management. Ferritin, which is an acute-phase reactant, is useful in determining the type of anemia present, as it is decreased (<30 ng/L) in iron deficiency, increased in anemia of chronic disease (100 ng/mL), and possibly normal in anemia of mixed etiology.(20)

The accumulation of data on the clinical utility of CRP and fecal calprotectin in monitoring patient status and early results from hypothesis-driven randomized controlled trials (such as Randomized Evaluation of an Algorithm for Crohn’s Treatment [REACT]) confirm that optimized therapy using tight monitoring results in superior long-term outcomes, including reductions in hospitalization, surgery, and complications (Figure 3).(21) 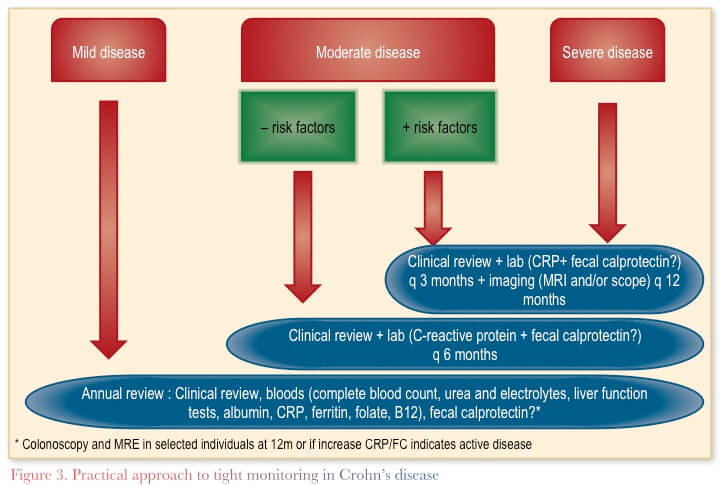 Biomarkers are important in both short- and long-term follow-up of patients with IBD. It is vital to stratify patients by risk, and to establish relevant goals of therapy. A comprehensive evaluation, including clinical and endoscopic presentation and fecal, serologic, and routine laboratory tests is recommended. Patient-specific strategies for follow-up using individualized and objective measures of disease activity can help to optimize long-term outcomes.

A 35-year-old male has had endoscopically and histologically confirmed ulcerative pancolitis for 7 years. At the time of diagnosis in 2007, his CRP was 65 mg/L and he was initially treated with mesalamine 4.8 g/d plus 30 days of rectal mesalamine and prednisone 40 mg, tapered over 14 weeks. He rapidly went into a clinical remission and eventually reduced his mesalamine to 2.4 g/d maintenance therapy. He lives 7 hours from a major metropolitan centre and has had his mesalamine prescription renewed by his family physician over the years.

He is newly married and his wife arranges a follow-up appointment with your office. In your office, he states he is well and asymptomatic. He has one more bowel motion per day than normal with no blood, equating to a partial Mayo score of 1, indicating full remission. Laboratory testing reveals the following:

The rest of his laboratory investigations are normal.

Clinical assessment is no longer adequate to follow patients with IBD, and objective monitoring is now an important part of monitoring clinical status. In this situation, CRP and fecal calprotectin are appropriate to identify the presence of subclinical disease activity.

His test results are the following:

The biomarker results indicate the presence of inflammation, which has increased over the past few weeks, and the risk of relapse, so additional investigation is warranted. In addition, objective monitoring is now sufficient to optimize therapy.

As colonoscopy indicates the presence of active disease and the biomarker results indicate the likelihood of relapse, more intensive treatment is recommended to prevent the development of clinical relapse. Increasing the dose of oral mesalamine from 2.4 g/day and adding a rectal formulation are appropriate responses in this situation.