Mentoring in IBD is an innovative and successful educational program for Canadian gastroenterologists that now includes an annual national meeting, regional satellites in both official languages, a website, an educational newsletter series, and regular electronic communications answering key clinical questions with new research. This issue is based on the presentation made by the contributing editor at the annual national meeting, Mentoring in IBD XVII: The Master Class, held November 4, 2016 in Toronto, Ontario.

A central feature of inflammatory bowel disease (IBD) is repeated intestinal epithelial injury with disruption of intestinal barrier function. This allows entry of commensal bacteria into the bowel wall, which activates an adaptive immune response and produces chronic inﬂammation. As the inflammation of ulcerative colitis (UC) is limited to the mucosa, mucosal healing should be a treatment target. Growing evidence links endoscopic healing with improved outcomes, such as sustained clinical remission; steroid-free remission; and reduced rates of hospitalization, surgery, and colorectal neoplasia. Mucosal healing should be considered a minimum therapeutic goal in the management of transmural Crohn’s disease (CD). Nevertheless, randomized trials have not yet proven the hypothesis that treating to this target leads to better outcomes than treating to resolution of clinical symptoms alone.

An investigation of the impact of early endoscopic improvement on subsequent clinical outcomes in the Active Ulcerative Colitis Trials (ACT-1 and ACT-2) found that patients treated with infliximab, who had lower endoscopy subscores at 8 weeks, had a reduced risk of colectomy by 54 weeks (P=0.0004) (Figure 1).(1) 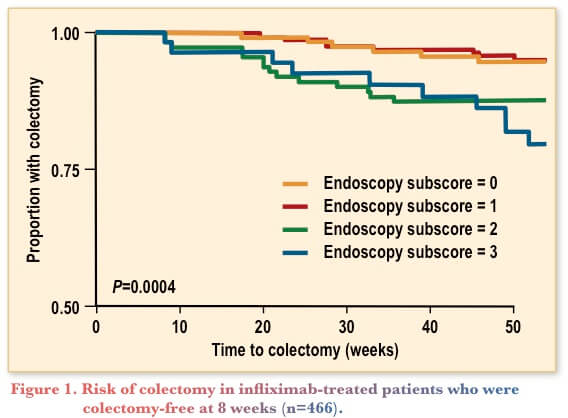 A study of 157 patients with newly diagnosed UC was conducted to determine whether early clinical and endoscopic responses to initial corticosteroid therapy predicted later outcomes.(2) Multivariate analysis found lack of mucosal healing at 3 months to be correlated with increased 5-year rates of hospitalization (P=0.0029) and colectomy (P=0.0268).

Despite these suggestive data, none of these studies provides causal proof that treating to a target of mucosal healing is better than treating to clinical remission.(1–3)

Clinical vs. endoscopic or histologic remission

A study to determine the association between patient-reported symptoms and endoscopic and histologic inflammation used patient data (N=103) from a multicentre observational study in UC.(4) Fecal calprotectin (FCP) was also measured. Lack of inflammation on endoscopy was associated with the absence of rectal bleeding and with lower FCP levels but not with complete normalization of stool frequency. Furthermore, histologic remission was not associated with symptom reduction. These data suggest non-inflammatory pathways may contribute to residual symptoms in UC.

A randomized, double-blind, placebo-controlled trial, Extend the Safety and Efficacy of Adalimumab through Endoscopic Healing (EXTEND), evaluated maintenance of mucosal healing in endoscopically documented moderate-to-severe ileocolonic CD (N=135) after adalimumab induction.(5) Rates of mucosal healing were 24% for adalimumab and 0% for placebo (P<0.001) at 52 weeks.

The Inflammatory Bowel Disease in Southeastern Norway (IBSEN) study, a prospective population-based cohort, followed 843 patients with newly diagnosed IBD at 1, 5, and 10 years to identify potential prognostic factors for the development of complications.(7) For the 237 patients diagnosed with CD, the cumulative relapse rate over 10 years was 90% (95% confidence interval [CI] 86–94%), and the cumulative probability of surgery was 37.9% (95% CI 31.4–44.4%). Independent risk factors for surgery were terminal ileal disease (P<0.001), strictures (P=0.004), penetrating disease (P<0.001), and age <40 years (P=0.03) at diagnosis. 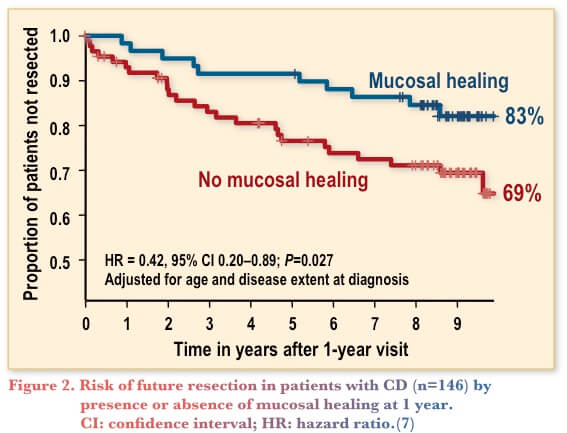 Stop Infliximab in Patients with Crohn’s Disease (STORI) prospectively studied infliximab discontinuation in 115 patients treated with infliximab plus an immunosuppressant for ≥1 year, who were in stable corticosteroid-free remission for >6 months.(10) The 1-year relapse rate was 43.9% ± 5.0%. Multivariate analysis found risk factors for relapse were male sex, absence of surgical resection, leukocyte counts >6.0×109/L, hemoglobin ≤145 g/L, C-reactive protein (CRP) ≥5.0 mg/L, and FCP ≥300 μg/g. Patients with ≤2 risk factors has a 15% risk of relapse within 1 year.

The Selecting Therapeutic Targets in Inflammatory Bowel Disease (STRIDE) program developed consensus recommendations for composite treatment targets for UC and CD.(11) The objective targets are endoscopic remission, although no consensus yet exists on the precise definition of this target.

STRIDE defined the treatment target for UC as follows:(11)

STRIDE defined the treatment target for CD as follows:(11)

Routine use of an appropriate endoscopic scoring system improves assessment and standardization of disease extent and severity. If scoring systems are not used, then it is important to describe the following for each endoscopy, including details for each bowel segment:

The Mayo endoscopic subscore can differentiate between superficial and deep ulcers, which can have prognostic value, but it does not quantify the extent of disease.(12)

The Ulcerative Colitis Endoscopic Index of Severity (UCEIS) scores the vascular pattern, bleeding, and erosions and ulcers.(13) The UCEIS has been validated and found to show satisfactory intra-investigator and inter-investigator reliability. The presence of bleeding discriminates between levels of disease severity.

The Crohn’s Disease Endoscopic Index of Severity (CDEIS) is a numerical grading system (0–44) that scores CD activity (including specific lesion types and disease extent) in each of the terminal ileum, right colon, transverse colon, left colon and sigmoid, and rectum).(14) As this complicated and time-consuming scoring system requires training and expertise in estimating the extent of disease and depth of ulcers, the CDEIS is used mainly in clinical trials.

The Simple Endoscopic Score for Crohn’s Disease (SES-CD) is a numerical grading system (0–56) that scores ulcer size, ulcerated surface, affected surface, and presence of narrowing in each of the ileum, right colon, transverse colon, left colon, and rectum on a scale of 0 to 3.(15) The SES-CD is a simple, reproducible, and easy-to-use scoring system that has been validated and found to have excellent inter-observer agreement and a strong correlation with the CDEIS.

Endoscopy allows visualization of the mucosa, but histology adds information about the submucosa, muscularis propria, subserosa, and serosa. Ultrasound and cross-sectional imaging can provide additional information about inflammation in the entire bowel wall.

A prospective study to determine predictors of clinical relapse followed 74 patients with clinically and endoscopically inactive UC for 1 year or until relapse.(16) Rectal biopsies were obtained at baseline, 6 and 12 months, and/or at relapse. Among the 27 patients who relapsed, multivariate analysis found younger age (P=0.003) female sex with >5 prior relapses (P <0.001) and basal plasmacytosis on rectal biopsy specimens (P=0.003) predicted shorter time to clinical relapse.

In clinical practice today, the ability to achieve mucosal healing varies with the disease and with the agent used.(18–27)

A database review of 19 eligible studies evaluating the diagnostic accuracy of CRP, FCP, and lactoferrin compared with endoscopy in patients with clinically active IBD found that these biomarkers, although useful, have limitations as surrogates for endoscopic disease activity.(28) The utility of CRP varies between CD and UC, and about 20% of patients do not have increased CRP with inflammation. In addition, results are confounded by age, sex, and body mass index. The utility of FCP is limited by unclear cut-off values, intra-individual variation, and lack of assay standardization. In addition, higher levels are normally seen in the colon compared with the ileum. CRP and FCP are most useful when baseline levels are correlated with endoscopy and serial measurements are used. The use of lactoferrin is limited by unclear cut-off values and the instability of lactoferrin at room temperature. 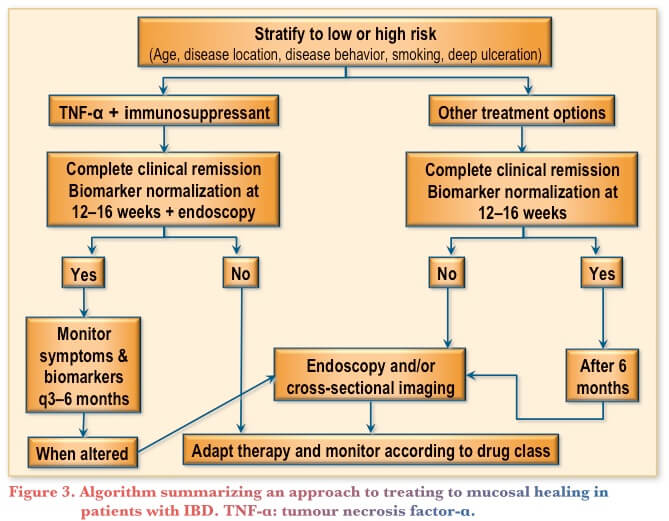 After a consultation that included a panel of laboratory tests and a full colonoscopy with mapping biopsies, you start induction therapy in a 22-year-old female with UC.

Appropriate baseline tests, at a minimum, are complete blood count, iron, ferritin, CRP, and FCP to define baseline inflammation and allow comparison at the induction therapy review at 12 to 16 weeks. An early drop in CRP is a positive indicator of response to a tumour necrosis factor-α (TNF-α) inhibitor. High pretreatment hemoglobin may also predict a better TNF-α inhibitor response. Adequate levels of albumin are necessary for optimal drug pharmacokinetics, and measurement of albumin at baseline may predict biologic pharmacokinetics. FCP is a reliable indicator of inflammation, and early reduction of this biomarker predicts clinical and endoscopic remission.

Use of biologics in UC is associated with high rates of primary (20–40%) nonresponse. Primary nonresponse to biologic therapy is rarely related to subtherapeutic drug levels, except in cases of acute severe colitis and fecal loss of drug or in cases with accelerated formation of antidrug antibodies. Predictors of response include greater disease severity, younger age, shorter disease duration, more extensive colitis, elevated CRP, normal hemoglobin and albumin, and elevated FCP. A determination of nonresponse at assessment requires adequate trough levels (>15 µg/mL), lack of improvement in inflammatory markers, and no evidence of infection.

Your patient goes into full clinical (as determined by the partial Mayo score you conduct at each visit) and biochemical (normal laboratory tests) remission on induction therapy. She now enters the maintenance phase of IBD therapy.

Inflammatory markers should be measured and clinical assessment conducted at 6 and 12 months. Endoscopy should be performed between 6 and 12 months to confirm mucosal healing. In UC, FCP correlates well with response to induction and mucosal healing and predicts loss of response to maintenance. Failure of normalization with therapy should prompt additional endoscopic evaluation.

The primary goal in IBD treatment is to maximize long-term health-related quality of life through control of symptoms, prevention of structural damage, normalization of function, and participation in social and work-related activities. Symptoms affecting quality of life must be addressed and treatment goals tailored to the individual patient. Objective measures, such as endoscopic findings, are a critical part of comprehensive disease assessment and effective disease management in the treat-to-target strategy.

As part of your protocol for objective monitoring IBD therapy you perform a colonoscopy.

Endoscopy should be performed within 12 months to confirm mucosal healing. Performing endoscopy too early can lead to false-positive results. When colonoscopy is not feasible due to stenosis or severe comorbidities, cross-sectional imaging can assess complications of UC and colonic disease.(29) Magnetic resonance imaging and bowel ultrasonography have good sensitivity for assessing luminal disease activity and are the most useful approaches in this situation. The treat-to-target concept rests on achieving mucosal healing. In UC, endoscopic remission is defined as a Mayo endoscopic subscore of 0 or 1.

(c) Catrile & Associates Ltd., 2017. All rights reserved. None of the contents may be reproduced in any form without prior written permission from the publisher. The opinions expressed in this paper are those of the authors and do not necessarily reflect the opinions or recommendations of the sponsors, the grantor, or the publisher.