Management of Clostridium difficile infection in patients with IBD

Mentoring in IBD is an innovative and successful educational program for Canadian gastroenterologists that now includes an annual national meeting, regional satellites in both official languages, a website, an educational newsletter series, and regular electronic communications answering key clinical questions with new research. This issue is based on the presentation made by the issue editor, Dr Lawrence J. Brandt, at the annual national meeting, Mentoring in IBD XV: The Master Class, held November 7, 2014 in Toronto, Ontario.

Epidemiologic evidence indicates that both colonization and infection with Clostridium difficile occur more frequently in patients with inflammatory bowel disease (IBD), especially ulcerative colitis (UC), than in the general population. Traditional risk factors for C. difficile infection (CDI) do not appear to be offset by the generally younger age of patients with IBD. Corticosteroid use and underlying colitis, with mucosal ulceration and increased colonic permeability, appear to augment risk.

Several hypotheses have been formulated in an attempt to account for the increased risk of CDI seen in patients with UC. UC may predispose to the development of CDI as a result of increased colonic permeability, mucosal inflammation, hypoalbuminemia, mural or intraluminal dysbiosis, or antibiotic therapy. C. difficile may also more readily colonize a colon damaged by UC. In addition, CDI may modify the natural history of UC, possibly by triggering IBD flares or producing more severe disease, even after resolution of infection.

C. difficile, an important pathogen in patients with IBD, is associated with substantially increased morbidity and mortality; the incidence of CDI complicating hospitalizations for IBD has increased significantly from 1998 to 2007 (Table 1).(1) CDI is a more common problem in patients with UC than in those with Crohn’s disease (CD).(2)

The common clinical impression that CDI worsens both the short- and long-term outcomes of IBD, with more frequent emergency department and hospital visits, increased length of stay, greater need for colectomy, and increased mortality rates is supported by several studies.

Because patients with IBD have an increased risk of CDI, the possible presence of CDI must always be considered in symptomatic patients. Even after colectomy, C. difficile enteritis and pouchitis may occur. Also, symptoms of CDI in patients with IBD may be indistinguishable from those of an IBD flare. Furthermore, CDI may trigger an IBD flare, further complicating diagnosis. The typical pseudomembrane of CDI is usually absent in IBD patients, and so flexible sigmoidoscopy is of limited diagnostic use. No guidelines are available for the use of enzyme-linked immunosorbent assay, glutamate dehydrogenase, or nucleic acid amplification tests, such as polymerase chain reaction, to diagnose CDI in patients with IBD.

IBD patients who test positive for C. difficile toxin require treatment. As no universal guidelines exist for treatment of CDI in patients with IBD, it seems reasonable to use the general CDI management guidelines, which are based on CDI severity, and to have a low threshold for treatment escalation; recent guidelines from the American College of Gastroenterology did not consider fidaxomicin as an option (Table 2).(11) In conjunction with antibiotic therapy, it is appropriate to consider avoiding corticosteroid use and to delay increasing immunosuppressive or biologic therapy until the response to antibiotic therapy can be evaluated. In the absence of data to the contrary, the author prefers vancomycin or fidaxomicin, rather than metronidazole, for patients with IBD. 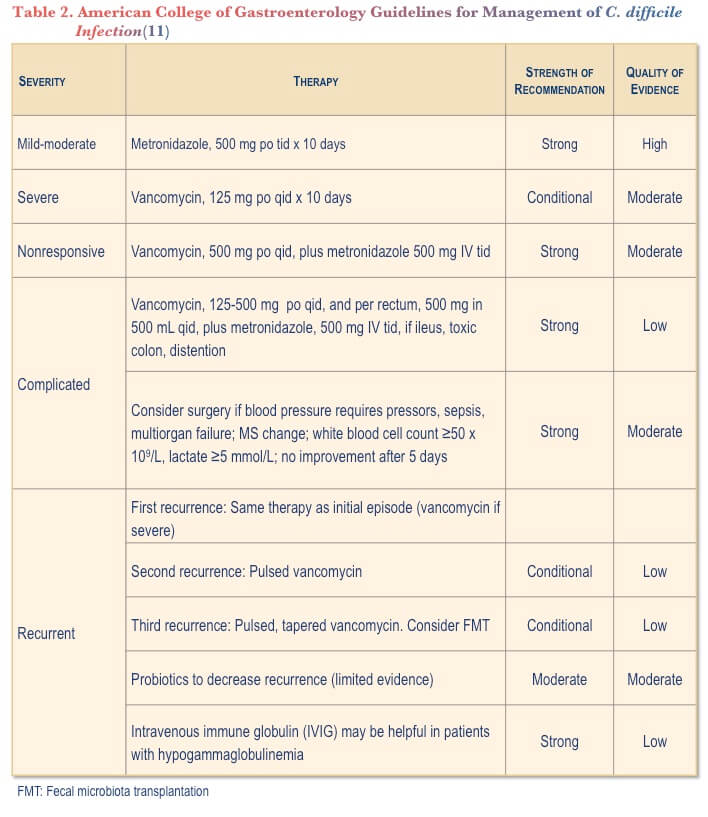 A phase III noninferiority comparison of the efficacy and safety of fidaxomicin, 200 mg bid x 10 days, and vancomycin, 125 mg qid x 10 days, in treating CDI in non-IBD patients enrolled 629 subjects. Clinical cure rates were similar in both the modified intention-to-treat (mITT) and the per-protocol (PP) analyses (Figure 2).(12) Recurrence rates were significantly lower in the fidaxomicin than the vancomycin group in both analyses, resulting in significantly higher global cure rates for fidaxomicin. Adverse events were similar in both groups. 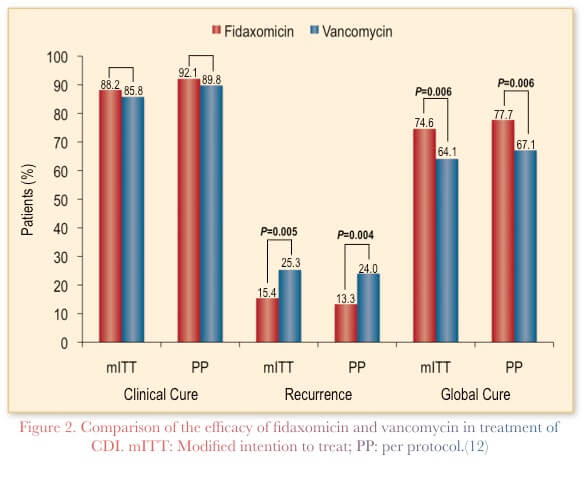 CDI recurrence is seen in up to 25% of successfully treated infections; a second recurrence may occur in 30 to 45% of patients with a first recurrence, and a third recurrence may occur in 45 to 60% of patients with a second recurrence.(13) After a third recurrence, patients tend to have CDI for a prolonged period of time. Recurrent CDI is more likely to be due to relapse than reinfection and may be seen within days or weeks of completing treatment; many recurrences may occur over many years, and recurrent CDI may be of similar or greater severity than the initial infection. After CDI, patients may also be left with persistent irritable bowel symptoms. No universal treatment algorithm exists, and no evidence base exists for antibiotic therapy recommendations. The rate of unsuccessful antibiotic therapy has increased from <10% before 2003 to about 20% since that time.

The microbiome, CDI, and IBD

The intestinal microbiome of patients with recurrent CDI demonstrates significantly decreased phylogenetic diversity compared with normal patients and those with first-episode CDI.(15) Specifically, substantial reductions in the phyla Bacteroidetes and Firmicutes are seen in patients with recurrent CDI. This finding highlights the potential utility of restoring microbial diversity by fecal microbiota transplant (FMT), for example, as a therapeutic avenue in CDI.

Several studies have investigated the microbiome in patients with IBD, and these also demonstrate changes from normal individuals. A study that sampled multiple locations in the gastrointestinal tract of a cohort of pediatric patients with new-onset CD before therapy initiation allowed characterization of the microbiome in CD (Figure 3).(16) The analysis found increased populations of Enterobacteriaceae, Pasteurellacaea, Veillonellaceae, and Fusobacteriaceae and decreased populations of Erysipelotrichales, Bacteroidales, and Clostridiales (Fecalibacterium prausnitzii). This microbial dysbiosis correlated strongly with disease status, and comparing the microbiomes of patients with CD who had and had not been exposed to antibiotics also found that antibiotic use further exacerbated the dysbiosis associated with CD. Another study evaluating the intestinal microbiome with fecal samples from 6 patients with CD and 6 healthy donors used a comprehensive metagenomic approach.(17) The analysis found that decreased complexity of the phylum Firmicutes, especially C. leptum, could act as an indicator of the fecal microbiota typifying CD. A meta-analysis and systematic review of the literature on the association between a reduction in F. prausnitzii and IBD found that populations of this organism decreased in patients with IBD, especially in patients with CD who had ileal involvement.(18) 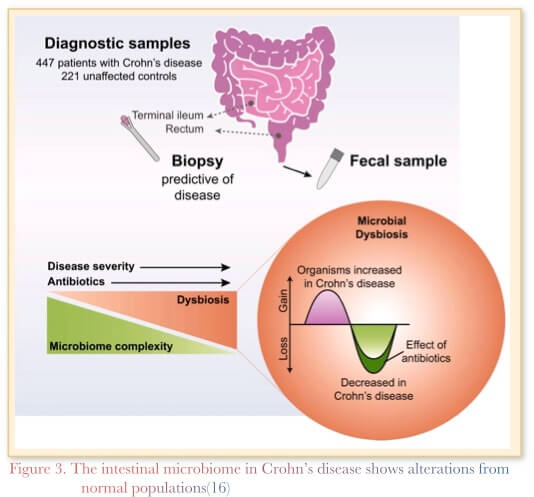 FMT has been investigated as a treatment for recurrent CDI. This therapeutic modality may avoid long-term and repeated courses of antibiotic therapy by re-establishing the normal diversity of the intestinal microbiome, thus restoring what has been termed “colonization resistance.”(11)

A systematic review and meta-analysis of FMT for recurrent CDI in patients without IBD identified 11 studies with 273 patients.(19) No randomized controlled trials (RCTs) were found. Clinical resolution was seen in 245 patients (90%). A trend towards higher resolution rates was seen with lower gastrointestinal FMT delivery by colonoscopy, and no serious adverse events were reported. Although FMT shows promise in the treatment of recurrent CDI, high-quality evidence is lacking. Only one long-term follow-up study has been reported and comprised 77 patients followed for >3 months. Four of the 77 patients reported development of an autoimmune disease at some time after FMT, although a clear relationship between FMT and the new disease was not evident.(20) Both well-designed RCTs and patient registries are required to identify appropriate patients and establish the clinical profile of FMT before advocating use of this approach in clinical practice.

Little is known about the interaction between IBD and CDI, and outcomes of FMT for CDI in patients with IBD are positive, but not as good as in patients without IBD. A retrospective analysis investigated the outcome of FMT in 41 patients with IBD and CDI treated with FMT via colonoscopy or sigmoidoscopy: 21 (51%) with CD (ileal 5%, colonic 50%, ileocolonic 43%), 19 (46%) with UC (rectosigmoid 11%, pancolonic 89%), and 1 with indeterminate colitis.(21) CDI was recurrent in 83% of patients, refractory in 10%, and recurrent and refractory in 7%. The median number of CDI episodes was 4 (range 1–12), and the median duration of CDI was 9.5 months (range 2–108 months). Cure was achieved in 33 patients (80%) with one FMT, and in 3 patients with a second FMT, for an overall cure rate of 90%. CDI recurrence was seen in 3 patients within 3 months of FMT. After FMT, IBD improved in 20 patients (49%), was unchanged in 14 patients (34%), and worsened in 7 patients (17%). At present, FMT for the management of CDI in patients with IBD cannot be recommended outside of a well-designed research protocol.

Mounting evidence indicating a role for gut dysbiosis in the pathogenesis of IBD led to investigation of FMT in this patient population. A few case reports and small series describe significant improvement or long-term cure, and two recent clinical trials report some short-term improvement of IBD with FMT.

Long-term follow-up (4.5–30 months, average 14 months) of 16 patients who had received FMT for refractory IBD included 14 patients (87%) with UC, and 2 with CD (13%).(22) After initial administration, patients self-administered fecal enemas on a schedule that tapered to a maintenance level. Improvement occurred in 10 patients (63%), with 3 patients having no flares and 7 patients experiencing a reduced number of flares. No patients reported worsening. Other IBD-related symptoms also improved and medication requirements decreased in many patients.

A retrospective analysis was performed of outcomes for 62 patients (40 males and 22 females) with UC who received FMT.(23) Based on a modified Powell-Tuck index, 92% responded, with 42 patients (67.7%) achieving complete clinical remission and 15 patients (24.2%) achieving partial response. At a mean 33 months, mucosal healing with no histological inflammation was present in 12 patients, patchy, mild inflammation in 8 patients, and active disease in 1 patient. Patient profiles of FMT in UC are provided in Table 3.

A placebo-controlled, randomized, parallel-group study of 75 patients with active UC but no infectious diarrhea compared the efficacy and safety of FMT and placebo, administered weekly by enema for 6 weeks.(24) Clinical and endoscopic remission at 7 weeks was the primary outcome. The Data Monitoring and Safety Committee stopped the trial early for futility, but enrolled patients (n=70) completed the study. Remission was seen in 9 (24%) patients receiving FMT and 2 (5%) patients receiving placebo (17% risk difference, statistically significant [95% confidence interval, 2–33%]). Adverse events did not differ significantly in the groups. Fecal donor affected outcome: 7 of 9 patients in remission had received stool from one donor. Duration of UC also affected remission: 3 of 4 patients with UC ≤1 year achieved remission, compared with 6 of 34 patients with UC >1 year (P=.04). Stool microbial diversity increased from baseline significantly more in patients who received FMT than in those who received placebo (P=.02).

The current standard material for FMT is raw, filtered, liquid stool that is infused while fresh. This material has no shelf life, and preparation is not standardized. Modifications to this process have produced a highly filtered FMT material that is frozen with cryoprotectant, giving it a long shelf life and making it transportable. This material is equipotent to raw stool in treating CDI. Other developments have resulted in a highly filtered, freeze-dried, lyophilised, encapsulated, enteric-coated FMT formulation that will enable long-term oral use.

C. difficile is an increasingly important pathogen in patients with IBD, especially UC, and presents the clinician with both diagnostic and management challenges, as CDI may mimic a UC flare, and IBD-specific guidelines do not exist to help the clinician make therapeutic choices. One emerging treatment option is the use of FMT, which has been evaluated more extensively in patients with CDI without IBD than in those with concurrent IBD and CDI. As evidence for dysbiosis in IBD exists, FMT is also being investigated as a therapy for IBD. Comparison of FMT in the treatment of CDI and UC demonstrates several differences (Table 4). Adequate supporting literature exists for the use of FMT in CDI, but data in IBD are highly limited. As a result, use of FMT to treat IBD should be restricted to the clinical trial setting until adequate data are generated. 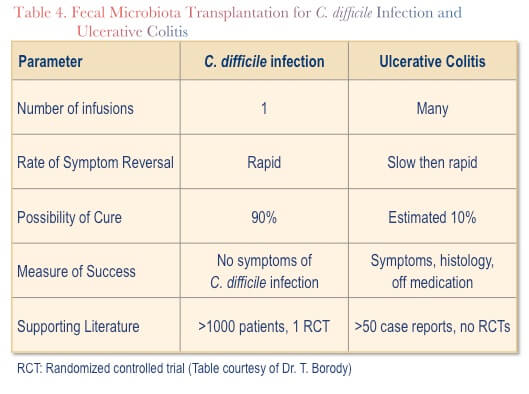