Mentoring in IBD is an innovative and successful educational program for Canadian gastroenterologists that now includes an annual national meeting, regional satellites in both official languages, a website, an educational newsletter series, and regular electronic communications answering key clinical questions with new research. This issue is based on the presentation made by the issue editor, Dr. Edward V. Loftus Jr., at the annual national meeting, Mentoring in IBD XVI: The Master Class, held November 6, 2015 in Toronto, Ontario.

The biologics approved for Crohn’s disease (CD) and ulcerative colitis (UC) in North America include the tumour necrosis factor-α (TNF-α) inhibitors infliximab, adalimumab, and golimumab and the anti-integrin agent vedolizumab. There is no doubt that these agents have favorably altered the natural history and improved the quality of life of many patients with inflammatory bowel disease (IBD). However, the variability in pharmacokinetics of TNF-α inhibitors, their potential for immunogenicity, and discrepancies between objective measures of bowel inflammation and clinical symptoms complicate their use in clinical practice.

Several principles apply to the treatment of IBD with biologics.

Base treatment decisions on objective data, rather than just symptoms.

The traditional step-up approach to therapy in CD is less likely to improve long-term outcomes or avert bowel damage. A study comparing top-down and step-up therapy found that early initiation of combination immunosuppression was significantly more effective (P=0.003) than traditional therapy in inducing remission and reducing use of corticosteroids in patients with CD (Figure 1).(5) Endoscopic follow-up of a representative subset (n=49) of the initial cohort of this study, a secondary analysis, found that complete mucosal healing predicted sustained, steroid-free remission 3 and 4 years after therapy was initiated (Figure 1).(6)

Ensure that each treatment is fully optimized before switching therapies.

Although individual studies of the relation between 6-thioguanine nucleotide (6-TGN) levels and IBD activity in patients treated with azathioprine or mercaptopurine showed variable results, a meta-analysis of 12 studies strongly supported the conclusion that higher 6-TGN levels are associated with clinical remission.(7)

An assessment of the relation between infliximab levels and outcome in patients with moderate-to-severe UC used data from the Active Ulcerative Colitis Trials 1 and 2.(10,11) At Weeks 8, 30, and 54, the proportion of patients achieving clinical remission increased with increasing quartiles of infliximab concentration. Patients with clinical response, mucosal healing, and/or clinical remission had significantly higher infliximab concentrations than patients not meeting these criteria (P<.01). Patients in lower infliximab quartiles had lower levels of serum albumin and a higher incidence of ADAs. A steady-state infliximab level of 3.7 μg/mL was associated with optimal outcomes.

An observational study of patients with CD (N=168) evaluated the long-term efficacy of adalimumab in patients with lack of response to infliximab and assessed the impact of trough levels and ADAs.(12) Of responding patients, 61.5% demonstrated sustained clinical benefit at the end of follow-up, a median of 20.4 (11.7–5 -30.0) months. During the study, 102 patients (65.4%) stepped up to adalimumab, 40 mg weekly, and 60 patients (38.5%) discontinued adalimumab, primarily due to loss of response. Patients who discontinued therapy had significantly lower adalimumab trough levels compared with those who continued therapy. ADAs, which were present in 9.2% of patients, reduced trough levels.

A treat-to-target approach to therapy in IBD generally uses mucosal healing as the target, although the target may be influenced by comorbidities and risks associated with drug therapy. The treat-to-target approach complements early initiation of combination therapy in high-risk patients. This approach requires regular objective assessment of disease activity, followed by any appropriate therapeutic adjustments, to ensure that the target, once achieved, is maintained indefinitely.(13) Although it has been suggested that mucosal healing should be assessed every 6 months until the target is achieved and then every 1 to 2 years, with the frequency adjusted according to the presence of inflammation (Figure 2), additional studies are needed to determine the optimal interval between target assessment. 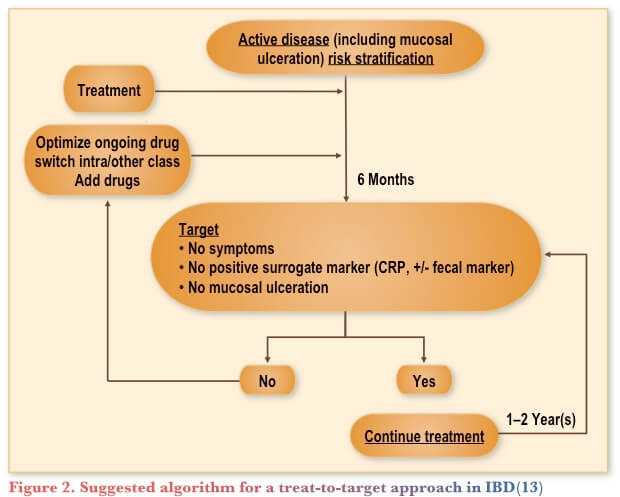 Assessment of response to treatment change

Assess response to a change in therapy objectively.

The magnetic resonance index of activity (MaRIA) is based on wall thickness, relative contrast enhancement, magnetic resonance imaging (MRI) edema, and MRI ulcers. A study performed to define and validate MaRIA included patients with active (n=29) or inactive (n=19) CD.(16) Patients underwent ileocolonoscopy, with CDEIS as a reference standard, and MRI. Independent predictors of disease severity using CDEIS as a reference were wall thickness, relative contrast enhancement, and presence of edema and ulcers on MRI.

Numerous factors have been shown to affect TNF-α inhibitor pharmacokinetics, including presence of ADAs; sex and/or body size; disease severity, including TNF burden; and albumin levels (Figure 3).(17) As a result, pharmacokinetics of these agents can be highly variable. As empiric adjustment of TNF-α inhibitor dose may not produce an optimal outcome, therapeutic drug monitoring (TDM) is a valuable clinical tool allowing clinicians to optimize therapy by maintaining drug concentration in an effective range.

Clinical impact of optimization based on TDM 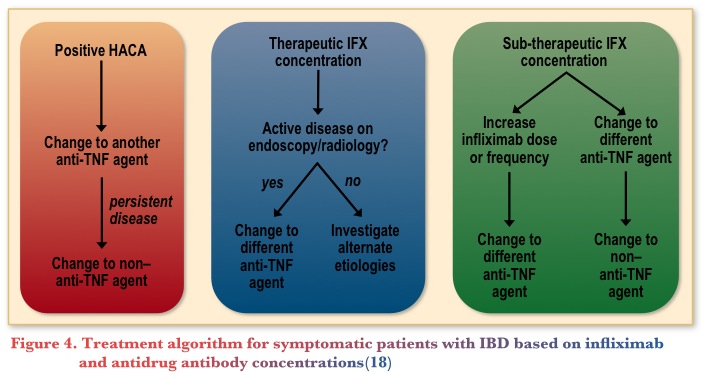 A retrospective observational pilot study assessed the impact of proactive TDM-based dose adjustments (n=48) to target levels on outcomes and compared this approach with conventional dosing (n=78).(20) Infliximab dose was increased in 12 patients (25%) and decreased in 7 patients (15%). The probability of continuing infliximab treatment was higher in patients receiving TDM-based dosing than in those receiving conventional dosing (hazard ratio [HR]=0.3; 95% confidence interval [CI]=0.1–0.6; P=.0006) and was highest for patients with infliximab trough levels >5 μg/mL (HR=0.03; 95% CI=0.01–0.1; P<.0001). Discontinuation was lower in the TDM-based dosing group (10%) than in the conventional dosing group (31%, P=.009).

Although mucosal healing is gaining acceptance both as a measure of disease activity in IBD and a clinical trial endpoint, no validated definition exists for mucosal healing in IBD.(21) In addition, full mucosal healing cannot be achieved in many patients, and the degree of healing required to affect outcomes is unknown. Also unknown is the incremental degree of healing that can be achieved by dose escalation or by switching therapies. Finally, the appropriate time interval between changes in therapy and reassessment by endoscopy has not been determined. Biomarkers, such as FCP, lactoferrin, CRP, and fecal S1 00A1 2, show promise as surrogate markers for endoscopic healing.

The community-based Randomized Evaluation of an Algorithm for Crohn’s Treatment (REACT) trial, which followed patients (N=1982) for 2 years, had a primary endpoint of clinical remission, defined as a Harvey-Bradshaw Index (HBI) <5 and no corticosteroid therapy at 12 months. The primary endpoint was not met, possibly because the mean baseline HBI was only 4.1.(22) REACT did, however, determine that algorithm-based treatment with early combined immunosuppression reduced surgeries, hospitalizations, and complications in CD.

The principles of treating IBD with biologics are a useful guide to therapy, including fully optimizing an agent using TDM before switching, using objective markers of inflammation as the basis of treatment decisions, and implementing early combination immunosuppression.

Ryan is a 24-year-old law student with 25 cm of ileal and nearly pancolonic Crohn’s disease. You diagnosed him at 22 years of age, and he has been on adalimumab monotherapy for the last 12 months. As he was negative for the Epstein-Barr virus (EBV), you did not start azathioprine. Initially, he did well clinically on adalimumab monotherapy with normalization of his Harvey-Bradshaw Index scores, CRP, and FCP, and mucosal healing after 6 months of therapy. He complains of increasing diarrhea that began about 2 months ago and occurs up to 4 days before his next injection of adalimumab.

Therapeutic drug monitoring is appropriate in this situation. As the risks associated with azathioprine therapy in EBV-negative patients are often perceived to be more significant than they actually are, combination therapy may have averted this situation.

Target trough levels for adalimumab are 4 to 9 μg/mL, and an increased adalimumab dose may be able to override the low ADA levels, although the sensitization threshold for adalimumab has not been conclusively determined. Three optimization strategies could be used for Ryan: increase the adalimumab dose, decrease the dosing interval, or add an immunosuppressive.

You double the dose of adalimumab and add methotrexate and a short course of prednisone, tapering down from 20 mg by 5 mg per week to provide immediate symptomatic relief. His clinical symptoms improve for almost 4 months, but then they rapidly decline with worsening of his diarrhea.

Ryan’s improvement is most likely due to the corticosteroid. TDM is again indicated.

– Adalimumab ADAs are high at 50 U/mL

With low adalimumab trough levels and high ADAs, it is now appropriate to switch Ryan to an alternative tumour necrosis factor-α inhibitor.

You switch Ryan from adalimumab to infliximab. He does amazingly well during infliximab induction with full clinical remission. During his second maintenance infusion, however, he has a severe infusion reaction and returns to your office for advice on next steps.

It is necessary to learn more about the infusion reaction before deciding whether to bring Ryan in to premedicate and observe him during the next infusion or switch out of class to an alternative therapy.

© Catrile & Associates Ltd., 2016. All rights reserved. None of the contents may be reproduced in any form without prior written permission from the publisher. The opinions expressed in this paper are those of the authors and do not necessarily reflect the opinions or recommendations of the sponsors, the grantor, or the publisher.