How should patients be monitored for loss of response in the treat-to-target strategy?

Monitoring for loss of response can include drug monitoring, assessment of biomarkers, and evaluation of the risk of relapse.

A proportion of patients with inflammatory bowel disease (IBD) develops adverse events or loses response with tumour necrosis factor-α (TNF-α) inhibitors or thiopurines.(1) Significant clinical data support the utility of therapeutic drug monitoring (TDM) in determining the cause of the problem and identifying an appropriate course of action. Compared with empiric treatment adjustments, TDM provides a logical rationale for dose adjustments or change of agents. The Trough level Adapted infliXImab Treatment (TAXIT) study found patients with Crohn’s disease (CD) randomized to a trough-level dose-adjustment strategy (3–7 μg/mL) had better disease control than those randomized to dose optimization after loss of response, with no increase in cost.(2)

The reasons for primary lack of response to TNF-α inhibitor therapy are not generally known. However, subtherapeutic drug levels may be one possible explanation, particularly in the setting of acute severe ulcerative colitis (UC). In this setting, a significant inflammatory burden, increased clearance through fecal loss, and accelerated formation of antidrug antibodies (ADAs) all may result in nonresponse to therapy.(1)

Secondary loss of response to TNF-α inhibitor therapy can occur in a variety of clinical contexts, and the appropriate therapeutic action depends on the specific combination of factors. Some general approaches are illustrated in Table 1.(3) 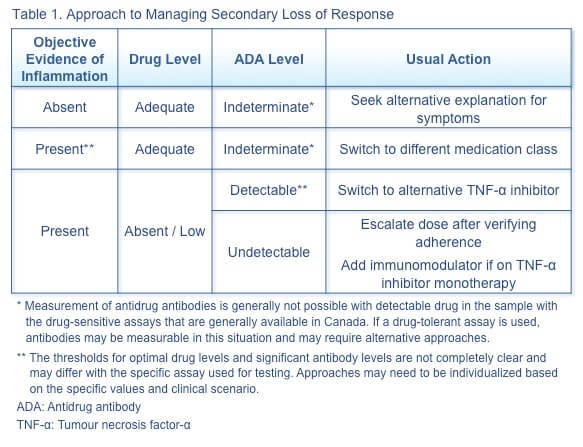 Adalimumab ADA-positive sera did not react with either infliximab or CT-P13.

A proportion of patients with IBD may have primary nonresponse to thiopurines, and treatment with these agents may also result in secondary loss of response.(1) The major reasons for thiopurine discontinuation are lack of efficacy and adverse events, both of which may be partially explained by levels of drug metabolites.

The main biologically active metabolite of 6-mercaptopurine (6-MP) and azathioprine is 6-thioguanine nucleotides (6-TGN).(1) This metabolite inhibits lymphocyte proliferation and T-cell apoptosis. Another metabolite, 6-methylmercaptopurine (6-MMP) is associated with hepatotoxicity, although it may also inhibit lymphocyte proliferation. Therapeutic levels of 6-TGN (235–450 pmol/8×108 erythrocytes), are associated with a 5 times greater likelihood of clinical remission than lower levels. As the onset of response to thiopurines is prolonged, determining dosing based on metabolite levels can result in a faster response and reduce costs. Excessive 6-MMP levels (>5,700 pmol/8×108 erythrocytes) increase the risk of hepatotoxicity by 3 times.

Conversion of 6-MP to 6-MMP is catalyzed by thiopurine methyltransferase (TMPT).(1) Measuring TMPT levels at treatment initiation is important, as low or intermediate TMPT activity increases the risk of myelosuppression from accumulation of excessive levels of 6-TGN with standard doses of azathioprine or 6-MP.

The approach to managing loss of response and adverse events with thiopurines depends on the metabolite levels and ratio (Table 2).(1) Metabolite levels can be measured after 2 to 3 weeks of treatment or dose adjustment and reassessed with loss of response, adverse events, addition of a medication possibly affecting thiopurine metabolism, and twice a year (for routine monitoring and to verify adherence). 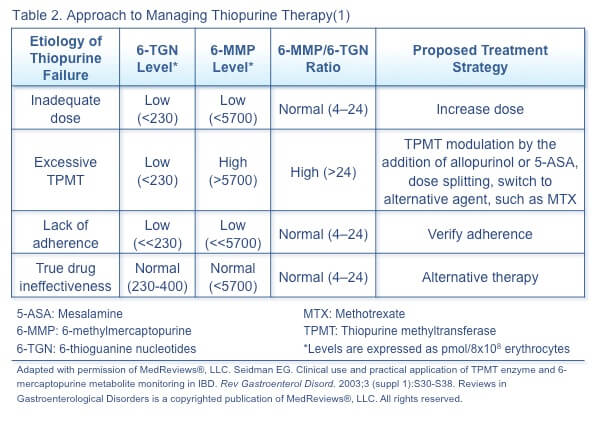 A oral corticosteroid course can rapidly induce remission in acute moderately-to-severely active IBD.(5) Up to 20% of patients, however, may have corticosteroid-resistant disease. Molecular mechanisms possibly responsible for steroid resistance are altered function of the glucocorticoid receptor, excessive synthesis of proinflammatory cytokines overwhelming the anti-inflammatory capacity of the corticosteroid, and increased drug efflux decreasing plasma levels. Oral corticosteroid failure may respond to intravenous corticosteroid therapy. Alternative therapy with a biologic agent should be considered.

Fecal calprotectin can discriminate between inflammatory and non-inflammatory gastrointestinal disease, although the role of this biomarker in routine relapse monitoring has not been fully delineated.(6) When the clinician suspects IBD flare, the first bowel movement of the day should be tested for fecal calprotectin. Suggested management of patients with specific fecal calprotectin levels is based on current evidence (Table 3).

In CD, elevated C-reactive protein (CRP) at baseline predicts response to TNF-α inhibitors, and elevation during therapy is an independent predictor of relapse.(8) Elevated CRP at baseline in patients with severe UC predicts failure of medical therapy. CRP normalization has been associated with remission in patients with IBD, and failure of normalization with treatment should prompt additional evaluation.

Prediction of relapse and severe disease

To date, the occurrence of disease flares in patients with IBD has not been predictable.(9) An array of predictors of severe disease and disease relapse have been identified. These include parameters such as endoscopic activity, inflammatory markers, laboratory parameters, fecal markers, and tests still primarily in the research realm such as cytokines, composition of the gut microbiota, intestinal permeability, NOD2 genetic polymorphisms, and immune-mediated antibodies, such as pANCA and ASCA.(9,10)

Nevertheless, no single marker or panel of markers reliably predicts disease relapse in UC or CD. The following algorithmic approach is proposed to identify patients with CD (Figure 1) and those with UC (Figure 2) with a high risk of clinical relapse.(9) A simple, rapid, economical, and noninvasive predictor of severe disease is needed to advance the management of IBD. 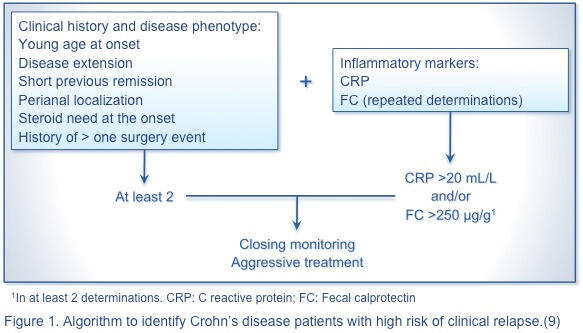 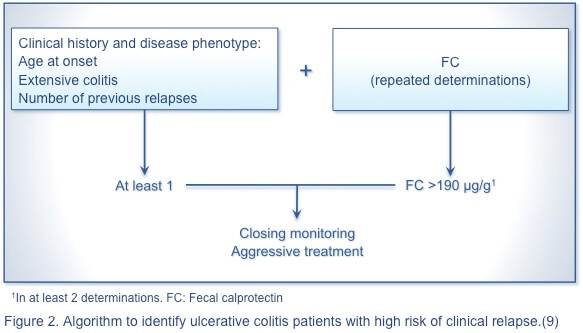