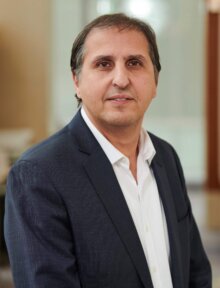 Dr. Alain Bitton is Professor of Medicine and the Director of the Division of Gastroenterology and Hepatology, McGill University and McGill University Health Centre (MUHC). Previously he was the McGill Gastroenterology Residency Program Director. His research in Inflammatory Bowel Disease (IBD) includes identifying factors that predict disease course and recurrence and defining the epidemiology of IBD in Quebec. He was a co-founder of the Quebec IBD Genetics Consortium and is a co-investigator in the Montreal-Boston collaborative IBD Genetics Research Center part of the 6 GRCs making up the NIH-NIDDK IBD Genetics Consortium which has identified IBD susceptibility genes. He has championed the creation of the MUHC’s IBD center, a multidisciplinary platform for healthcare delivery, research and education in IBD.  He spearheaded the development of a tool to be used for ongoing assessment and improvement of care of IBD patients in Canada.