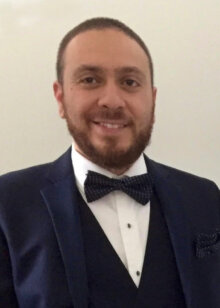 Talat Bessissow earned his medical degree at McGill University (2005) where he then completed post-graduate training in Internal Medicine and Gastroenterology (2005-2010). In 2012, he trained in inflammatory bowel disease and advanced endoscopic imaging at the Gasthuisberg University Hospital, Leuven, Belgium under the supervision of professor Severine Vermeire. He also competed a Master in experimental medicine and epidemiology from McGill University in 2016. Since 2012, He is a full time Associate Professor to the Division of Gastroenterology and Attending Staff at the McGill University Health Center. He is member of the McGill IBD group as well as the McGill small bowel program.

His current research focuses on the role and outcomes of mucosal healing in inflammatory bowel disease as well as early detection of neoplastic lesions in ulcerative colitis. His researched has led him publish over 70 peer-reviewed full papers. He is the vice-president of the Canadian IBD Research Consortium. He has also served as a review for multiple national and international journal and is currently an associate editorial of the Journal of the Canadian Association of Gastroenterology.